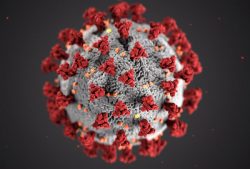 A Connor parishioner, who has experienced Covid-19 both as an NHS key worker and having contracted the virus herself, has spoken of the impact of the illness and of her relief at now being well enough to return to work.

The 65-year-old, who prefers not to be identified, returned to work on April 25 after three weeks during which she battled the debilitating virus at home, isolated from – but with the support of – her husband.

“Three weeks ago I came home from work at Antrim Area Hospital and didn’t feel well. It is hard to describe, and totally different to anything I have experienced before,” she said.

“I had no appetite and went to bed early with a high temperature. I knew it was Covid-19. The next day my temperature had come down a bit but I felt generally really unwell. I had a tightness in my chest. I was scared my breathing was going to stop.”

The lady said that despite her job, which involves working closely with patients in different hospital wards, including the Covid-19 ward, she was surprised to have contracted the virus. “I was so careful. I had enough Personal Protective Equipment to feel as safe as possible,” she said.

But she admits that in the weeks before she became ill, she would not have worn even a mask outside the Covid-19 ward.

“In the days before I became unwell I could have been with a patient who had not been diagnosed with Covid-19, and then later see the same patient in the Covid ward,” she said. “Now we have to wear masks in every ward in the hospital.”

A few days after becoming ill, she rang a doctor. “I was really unwell, my chest was tight and I was petrified I was going to get worse,” she recalled. The doctor advised her to go to a Covid-19 Centre for tests.

“My ECG was grand, my blood pressure was a bit high, which I have never had before, but I did not have to be admitted to hospital. I was told to go home, drink lots of water, do breathing exercises and have complete rest. Three days later my chest was easing. I knew that I was coming out the other side,” she said.

“This really, really saps up all your energy. The tiredness is hard to describe.”

The lady, who is a churchwarden in Connor Diocese, said that thankfully she is otherwise fit and healthy, with no underlying health problems. She was given the all-clear to return to work by her doctor (by telephone). She said she did feel ‘quite frightened’ about the prospect, but her manager had arranged that she would initially focus on wards other than the Covid ward.

“Because I did not have to go to hospital, my symptoms were classed as ‘mild’ but there was nothing mild about it,” she said.

“Social distancing and the lockdown are playing a huge part in not spreading this virus. I can understand people wanting to get out in this good weather, but it is unsafe to do so. Everybody has to go by the guidelines to keep this under control. If people start relaxing, the danger will increase.”