Bells to ring out as VE Day is remembered in lockdown

This Friday, May 8, has been designated a Bank Holiday as the United Kingdom celebrates the 75th anniversary of VE Day – and remembers the end of war in Europe.

The coronavirus outbreak means that there will be no packed church services, street parties, parades or concerts.

The normal May Day Bank holiday has been moved to Friday in honour of VE Day. In previous years, the May Bank Holiday Monday would have seen Belfast City Centre swarming with marathon runners and supporters – although the marathon did change to Sunday rather than Monday in 2019. But this year there was no marathon on either day. The city centre streets stayed silent, a country in lockdown.

The current health crisis does not mean this historic anniversary will not be celebrated. Across the country, church bells will ring at 7pm as part of a wider initiative to celebrate VE Day.

The Rev David Lockhart, rector of St Cedma’s, Larne, will be among those ringing the bells at 7pm on Friday. David is using the parish Facebook page to engage people with this important anniversary.

“Sunday’s online service will take the form of a commemorative service for the anniversary of VE Day,” David said.  “I hope to use photos of Larne town and Glynn War Memorials.”

St Cedma’s bell will also feature in Mid and East Antrim’s commemorative service. Due to the Covid-19 restrictions, David was the Standard Bearer. 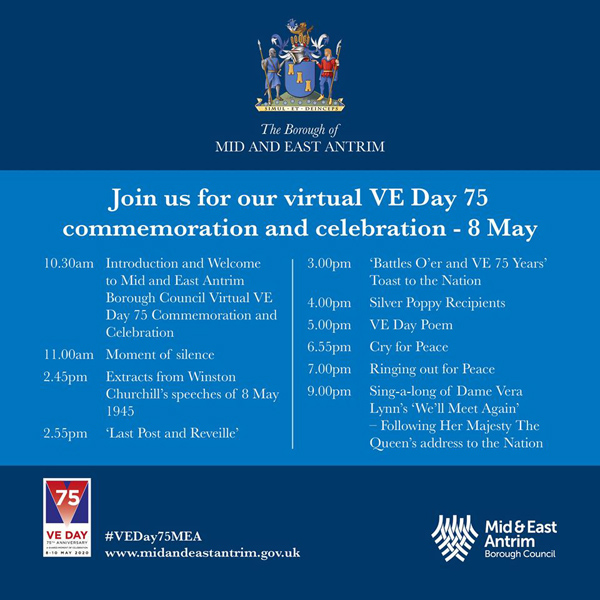 Other parishes across Connor Diocese will be doing what they can to pay tribute to those who gave their lives to make VE Day happen.

The Royal British Legion (RBL) is calling on the nation to mark the 75th anniversary from home.

A statement on the RBL website reads: “Join us on Friday May 8 as we pay tribute to the service and sacrifice of the entire Second World War generation, from British, Commonwealth and Allied Forces to evacuees and those who served on the home front.

“As we face some of the most challenging times since the end of the Second World War, now more than ever it is important to unite in recognition of service to the nation, just as communities did 75 years ago. There are many parallels between the struggles of the Second World War and what we are going through today. We look to our Second World War generation to learn from their experiences, and we continue our work to protect them from the threat we currently face.”

VE Day, May 1945, was reported in the magazine of St Anne’s Cathedral, Belfast. The Cathedral Digest recorded the removal of the last bricks and sandbags from the Great West Doors. The building had ‘happily reverted to its pre-war appearance with light flooding through the stained glass windows… Perhaps what we missed most was the Great West Window with its glowing colouring… Restored now, without its protective brick wall… the window stands out resplendent in the afternoon light of a westering sun,’ the article stated.

Across the UK events to mark the 75th anniversary of VE Day include:

You can read real accounts, with images, of VE Day in Northern Ireland 75 years ago on the WartimeNI website.

If your parish is doing something special to mark the 75th anniversary of VE Day, please let us know by emailing dco@connordiocese.org.