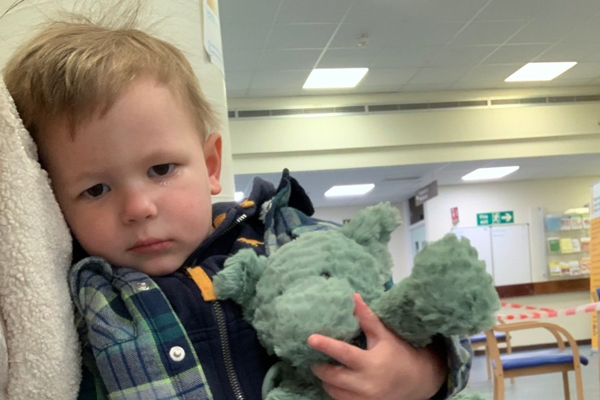 Dax Peek on a hospital visit. His family are raising funds to get him to America for surgery on a benign tumour.

David and Jacquie Peek, members of Finvoy Parish, say the response to an appeal to raise funds for urgent surgery for their two-year-old grandson Dax has been ‘mind-blowing.’

Dax, who lives in Dunbar, Scotland, with his dad Jonny, mum Devon and big sister Darcie, has recently been diagnosed with an Acoustic Neuroma/Vestibular Schwannoma.

May 20th – for an update on Dax’s situation, click HERE.

This is a rare type of tumour that is normally seen in adults. The tumour is benign, and grows on the nerves from the inner ear canal leading into the brain.

Dax’s condition was first noticed in March. On their Gofundme page – which has raised £40,300 of a £50,000 target in just a week – his parents write that Dax was no longer able to move his left side of his face or close his left eye and had developed a facial droop on the left side.

The family was on a trip to Paris Disneyland at the time, and Dax was admitted to hospital where the diagnosis was Bell’s Palsy.

“Unfortunately, in late March Dax’s condition got worse with persistent vomiting, he could no longer walk in a straight line, kept falling over and losing his balance when unaided,” Jonny and Devon write. “He was admitted to hospital where they carried out two separate MRI scans under general anaesthesia, which lead to the tumour diagnosis.”

Grandparents David and Jacquie moved from Scotland to Co Antrim three years ago to be close to their daughter and her family who live in Portrush.

David said the situation with Dax had progressed very quickly. “The schwannoma is benign and is not a cancer, but it has huge implications for Dax. It is wrapped around his facial and audio nerves,” David said.

“Dax could lose his hearing at any time while the tumour is in place, and if not removed, he will be left with the facial palsy for life. He is also at risk of damage to his eye or even loss of sight as he is no longer able to close his left eye.”

The family paid tribute to NHS staff in Scotland for doing ‘an amazing job’ for Dax, especially in the current Covid-19 situation. There is not the experience in the UK, however, of operating on this tumour in children or to rehabilitate Dax’s facial nerve and facial muscles to restore his smile and preserve his hearing.

One option is to watch and wait, using MRI to monitor the tumour. 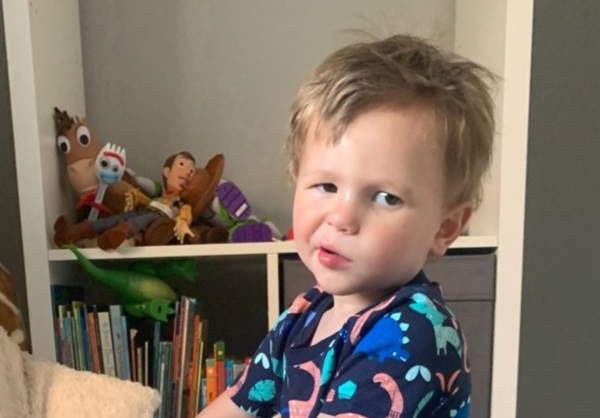 Research by the family led to a surgeon in San Diego, USA, who has experience and knowledge of these kind of tumours. Jonny and Devon made contact using email and Zoom, and sought his opinion, which is to remove the tumour.

The surgeon has agreed to do the surgery and wants to carry this out as soon as Covid-19 travel restrictions are lifted.

“The full extent of the damage will depend on where the tumour is located,” said David. “But if it is not removed, Dax will lose his hearing and possibly his sight. Hopefully, once the travel restrictions are lifted, we can get him across to America for the surgery as soon as possible which will give him the chance of a hopefully normal life.”

Because of the lockdown, David and Jacquie have only been able to see Dax, Darcie, Jonny and Devon in video calls, but David said Dax seemed to be just learning to cope with his condition.

“He gets tired very quickly and staggers a bit because his balance is compromised, but otherwise he is a typical boisterous two-year-old,” he said. “The poor wee fellow tries to smile, but it doesn’t work.”

Launching their Gofundme page on April 29, Jonny and Devon said they hoped to cover as much of the cost of the operation and the aftercare themselves, but that the cost would be considerable. “If you are able to help in any way we cannot thank you enough. If you are unable to financially help, just sharing this will help us so much,” they stated.

David said the response to the appeal had been ‘quite staggering.’

“It has been mind-blowing and very humbling,” he said. “People have been making donations, not just from this country, but from America and other places. It is quite staggering, especially as we have Covid-19 going on and so many others are struggling with all sorts of things. At times like this, human nature really shines through.”

To support the appeal to raise funds for Dax’s surgery, visit the family’s Gofundme page. 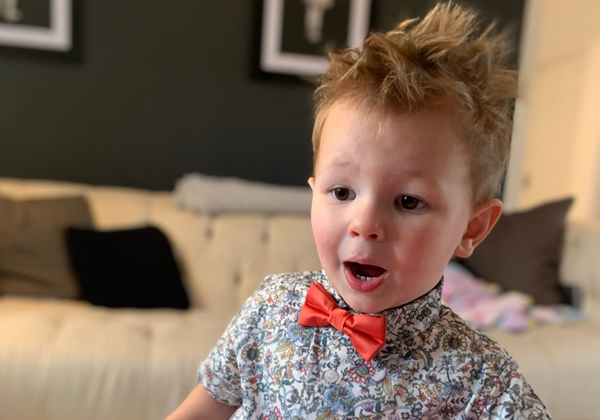