Kathleen home after being caught in NZ lockdown 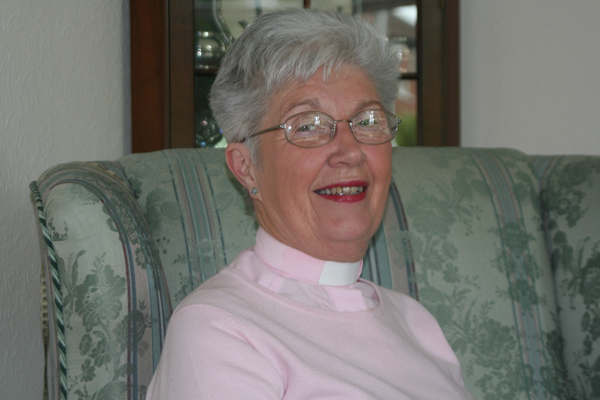 The Rev Kathleen Brown, photographed for a previous news item.

The Rev Kathleen Brown is getting her breath back as she quarantines at home after a whirlwind ‘rescue flight’ from New Zealand where she was caught up in lockdown.

Kathleen retired as rector of St Paul and St Barnabas Parish in 2007, and since then helped out in for a time in St Nicholas’, Carrickfergus. She left her home in Carrick to visit her brother in Auckland on March 5, a trip she has taken every year for the past 10 years. She was due to spend four weeks in New Zealand.

“I was aware of the coronavirus when I flew out, but wasn’t really thinking about it,” Kathleen said. “What I did notice was the number of empty chairs in Heathrow Airport.”

New Zealand closed all borders and entry ports on March 19.  Two days later, Prime Minister Jacinda Ardern announced a four stage coronavirus alert system, moving swiftly to level four. On April 27 the alert was downgraded to level three, and at midnight on May 13, it was lowered to level two.

“Jacinda is a very good leader,” said Kathleen. “At lunchtimes, she was on TV telling us exactly what was happening and what was going to happen.”

Kathleen tried to reschedule her flight back to the UK, but she was two days too late, as the lockdown was being strictly enforced. “My brother Stewart and his wife Dory were very keen that I would stay on with them. I had my own room and every day we went out once to exercise – Stewart ran, I walked and Dory went on the bike.”

Kathleen was not too concerned about coming home, until the company she had booked her flight with sent an email saying she would have to make her own arrangements to get back to the UK. Stewart contacted the British Embassy who took Kathleen’s details, but said there were no ‘rescue flights’ planned at that time.

“We thought it would be a couple of weeks, so headed out for a walk, but my phone rang at lunchtime and it was a call from the Embassy telling me to be at Auckland Airport for 9am the next morning!” said Kathleen.

The flight, which Kathleen said was full, travelled via Hong Kong, where the passengers disembarked while the plane was refuelled. “They put on food for us. It was like an event in church, when all the snacks are set out on a long trellis table in the centre of the room. We were back on the plane three hours later and on our way to Heathrow,” Kathleen said.

The passengers on the flight, who were all British, had their temperatures taken when boarding at both Auckland and Hong Kong. “Picking up the virus on the flight was at the back of my mind, but I know we had all come out of New Zealand so it was probable we were all clean,” Kathleen said.

“A few people were wearing masks, but not all. The cabin crew wore masks when I was flying out to New Zealand, and I noticed they were wearing better fitting masks on the flights home.” There were only a few passengers on her connecting flight to Belfast, and Kathleen took a taxi from the airport to her home – arriving back a few weeks later than planned!

“I do have mixed feelings as New Zealand has now relaxed its lockdown, and the people there are so very friendly. But it is lovely to be home and to be able to chat to friends on the phone. I am isolating for two weeks, but people have passed by and talked to me from the road,” she said.