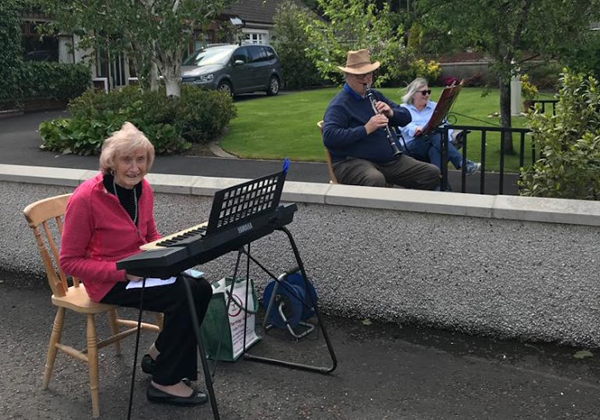 Alicia Duncan on keyboards and Roger Goodcliffe on clarinet leading their neighbours in a sing-a-long.

There’s nothing like a good old sing-a-long in times of adversity, and on Sundays, Ballymoney parishioner Alicia Duncan is helping her neighbours raise their voices – and their spirits.

Alicia, a retired secondary school teacher, plays the keyboard, while her neighbour Roger Goodliffe plays clarinet. Their neighbours in Beech Hill, Ballymoney, come out into their gardens to join in this weekly ritual.

Now self-isolating alone, Alicia, whose husband Albert, former Archdeacon of Dalriada, died in February last year, says the sing-a-long at 2.30pm on Sundays cheers everyone up.

“It was the brainchild of my neighbour Roger, who is also retired. He came out onto his lawn for a few Sundays with his clarinet, and we would all gather round – from a safe distance – and sing along to his playing.

“Then he suggested I play the piano. I didn’t have a keyboard, so Roger got one for me and now we play as a duet for about three quarters of an hour.”

Roger normally selects a theme in advance. “They are not hymns,” Alicia said. “Although some of the children like to sing songs they have learned in Sunday School. On previous Sundays we have had Frank Sinatra, Irish Songs and Disney songs.”

Alicia, who is an experienced pianist and organist (she still helps out in church on occasions) has no bother picking up a new tune.

“I enjoy it, I think it cheers people up in the situation we are in,” she says.