A bathtub first for Connor Canon? 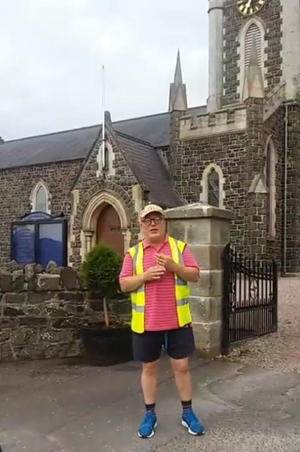 The Rev Canon Derek Kerr broadcasting online at the end of his 15 mile walk celebrating his 30 years in ministry.

It must be a first for Connor Diocese, in fact, it could be a first for the Church of Ireland or even the Anglican Church anywhere in the world – a clergyman broadcasting a message to his followers from his bathtub!

The Rev Canon Derek Kerr, rector of Drummaul, Duneane and Ballyscullion and Antrim Rural Dean, was easing his joints in hot water having just walked 15 miles with the Rev Dr Alan McCann, rector of Holy Trinity, Woodburn, in Carrickfergus.

The walk, which took the two clergymen six and a half hours with a couple of short breaks, was a celebration of Derek’s 30 years of ordination – and to continue his mission to raise funds to help Fields of Life fight Covid-19 in Africa. Click HERE to donate.

The two clergymen, who have been close friends for many years, walked from the vicarage to Ballyscullion, Ballyscullion to Duneane, Duneane to Drummaul, and finally from Drummaul back to the vicarage.

Derek provided video updates on Facebook along the way (including three ‘takes’ of the same video at Duneane!) and mowed the vicarage lawn before heading to the bath.

Introducing the video, Derek tells viewers that his is ‘lounging in the bath as final little treat before bed’ adding that he is ‘quite sore,’ and is ‘walking like John Wayne who has just got off the horse after a very long time on the horse!’ 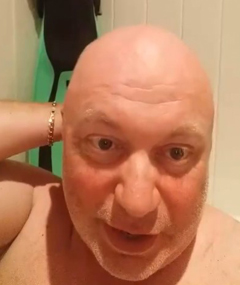 Yes .. the Rev Canon Derek Kerr is indeed live-streaming from his bathtub!

Viewers learn that Winnie the Pooh, Tigger, Eeyore and Piglet – part of his very extensive collection of Pooh memorabilia – have been ousted from the bath to allow the vicar to get in.

“This is the third time in 13 years I have had a bath, I’ve had a few showers in between, you will be glad to know,” Derek tells his viewers, before filling them in on the story of a lone flipper standing behind the bath.

Before closing his final video, Derek said the day had been ‘great oul craic, a little sense of achievement, a little ambition fulfilled, bucket list ticked,’ and thanked people for their ‘kindness, fun and cheeky comments.’