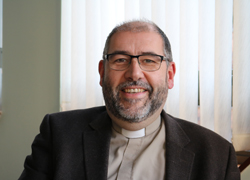 Archbishop John McDowell has paid tribute to Connor Bishop-designate George Davison who has stood down as Clerical Honorary Secretary of the General Synod.

Archdeacon Davison tendered his letter of resignation at the Standing Committee of the General Synod when it met online on June 16.

Archdeacon Davison, who has served as Clerical Honorary Secretary since 2011, was elected Bishop of Connor in February.

The Rev Canon Gillian Wharton, on behalf of the other Honorary Secretaries, expressed gratitude for Archdeacon Davison’s wisdom and measured approach.

Archbishop McDowell thanked Archdeacon Davison for giving himself with tremendous energy to the role, in addition to his other commitments.

An election for the new Clerical Honorary Secretary for the Province of Armagh will follow at the September meeting of Standing Committee.

The June meeting saw Archbishop McDowell in the chair for the first time. He welcomed members and was welcomed by the Bishop of Cork, the Rt Rev Paul Colton, to his new role as Archbishop of Armagh and Primate of All Ireland.

The Honorary Secretaries reported that the strategic plan for a whole Church of Ireland approach to Children’s and Family Ministry had been approved by the Allocations Committee. The Rev Canon Ian Berry was thanked for his work on behalf of the Standing Committee in discussions between the Children’s Ministry Network and Sunday School Society Ireland.

Standing Committee endorsed an exploration of the relationship between parishes and Bishops’ Appeal, and an investigation of the possible future development of that relationship, ahead of its forthcoming 50th anniversary in 2022.

The committee adopted the Commission for Christian Unity and Dialogue’s response to the Anglican-Roman Catholic International Commission’s Walking Together on the Way report. The response was prepared by the Commission’s Anglican and Ecumenical Affairs Working Group.

The Dean of Belfast, the Very Rev Stephen Forde, was appointed to attend the 11th Assembly of the World Council of Churches – due to take place in Germany in 2022 – as the Church of Ireland’s representative.

The Rev Canon Dr Maurice Elliott was appointed as observer on the Meissen Commission, to serve from 2021 to 2026. The Meissen Commission is a formal dialogue between the Church of England and the Evangelical Church in Germany, with the Celtic Anglican Churches sharing an observer place in a rotating arrangement.

The Bishop of Derry and Raphoe, the Rt Rev Andrew Forster, was nominated as a trustee of Churches Together in Britain and Ireland on behalf of the Church of Ireland.

The next meeting of the Standing Committee is to take place on September 15.