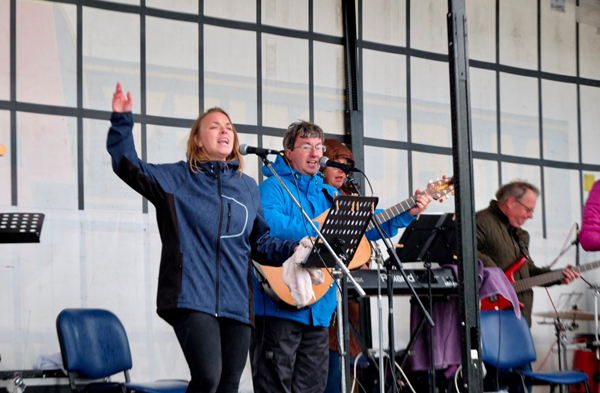 Worship in the carpark in Ballyclare.

Rain did not deter people from attending a joint churches drive-in service in Ballyclare on Sunday June 28, with 130 cars parked up in the Sixmile Leisure Centre carpark.

Led by the Rev Jonny Campbell-Smyth of the United Parish of Ballynure and Ballyeaston (Ballyclare), members of all churches in the town came together to worship from the warmth of their cars.

The service was broadcast directly to the car radios, which Jonny said worked extremely well given the wet weather.

The worship was led by the joint worship teams of Ballyclare Presbyterian and St John’s, Ballyclare. 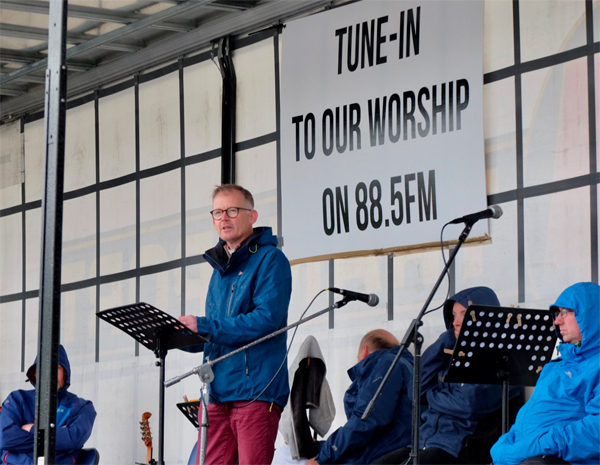 The Rev Jonny Campbell-Smyth, rector of Ballynure and Ballyeaston, leads the service at Sixmile Leisure Centre in Ballyclare on June 28.

Jonny said he had been keen to make the gathering as interactive as possible. “I asked people to affirm their ‘Amens’ with a beep on the horn,” he said. “I was amazed at the end of our singing and at the end of my talk how the sound of horns echoed around the car park.

“It was so encouraging to see so many people join us. It demonstrates that the Church of God is alive today and we are not constrained by our buildings being closed. This gathering will springboard our churches as we move out of lockdown.”

He continued: “Many people were encouraged at the opportunity to come together, even though they had to remain in their cars. It is envisaged that these drive-in services will be organised monthly over the summer with the support of Antrim and Newtownabbey Borough Council.”

There were 130 cars in the carpark for the Ballyclare drive-in church service on June 28.