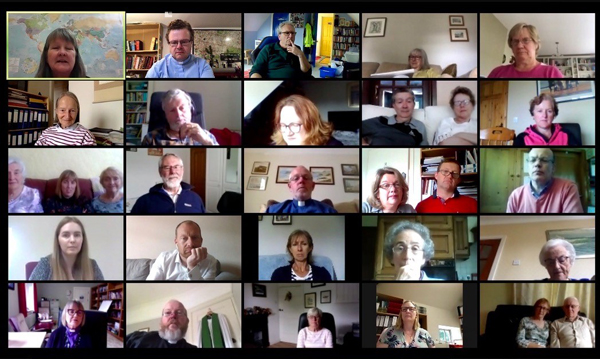 Members of CMSI taking part in the 2020 AGM online.

More than 40 members of Church Mission Society Ireland (CMSI) from across Ireland and further afield gathered online on June 30 for the society’s Annual General Meeting.

Due to the continued restrictions on large gatherings due to the Covid-19 pandemic, the meeting was attended via Zoom video conferencing.

CMSI Mission Resources Manager Roger Cooke said: “While the face-to-face fellowship and shared worship that normally marks this occasion were missing, this virtual approach enabled the AGM to proceed and helped connect folk from across the CMSI family.

“The response from those who took part has been very positive – with many people commenting how successful it was.”

Following an address by the Chair of the Board of Trustees, the Rev Adrian Dorrian, Jenny Smyth gave her Mission Director’s report, sharing highlights of the past year and outlining progress on the key priorities of CMSI’s Strategic Plan. View their recorded addresses on the CMSI website.

Jenny drew particular attention to the number of Global Partner visitors – 12 in all – that had been hosted in Ireland over the past year. The report finished by considering some of the challenges and opportunities that have been created for CMSI and its partners by the Covid-19 crisis.

The Finance Report was presented by Will Grier, after which, three trustees were elected to the Board: Lou Talbot-Berne, who joined the Board in 2017, was re-elected for a new three-year term. Ruth Mann and Very Rev Geoff Wilson were also elected to the board – having initially been co-opted following the postponed AGM in March.

Roger said: “Please join us in praying for Lou, Ruth and Geoff and the whole Board of Trustees as they continue to guide and oversee the work of CMSI.”