The Representative Church Body (RCB) Library’s long-term project to digitize and make freely available the complete run of the Church’s all-island newspaper, the Church of Ireland Gazette (in print since 1856) is about to be fulfilled with the addition of the remaining decades from 1950 to 2009 to the existing online search engine.

This project began modestly in collaboration with the then Editor and Board of the present-day Gazette, back in 2013 with the content of the 1913 editions uploaded. Since then, a combination of state funding, private sponsorship and the support of central Church funds has enabled organic growth.  Previously, researchers have had free access to editions up to 1949. Now, thanks to a generous grant from the Irish Government’s Reconciliation Fund, administered by the Department of Foreign Affairs, the Library has been enabled to finish the job.

Commencing on September 1, and concluding in the early months of 2021, the RCB Library will incrementally release all remaining editions of this rich resource from 1950 to 2009 (at which point the Gazette becomes available as an e-paper) at decade intervals, each in conjunction with an online exhibition under the banner headline: ‘The Borderless Church’. 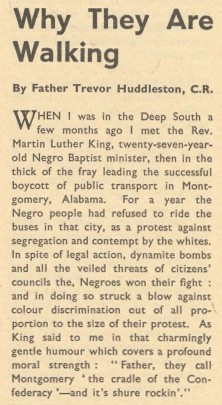 Father Trevor Huddleston’s account of a meeting with the Rev Martin Luther King at the time of the Montgomery Bus Boycott, syndicated from the Observer and published in the April 12 1957 edition of the Church of Ireland Gazette.

The first presentation is an analysis of the 1950s by Dr Marie Coleman, Reader in modern Irish history at Queen’s University Belfast.  Her text is richly-illustrated and brings to life the many topical issues of national and international significance covered in the Gazette’s pages during the decade. These include Dr Noël Browne’s Mother-and-Child Scheme, the Fethard-on-Sea boycott, and the rise of what was then termed as the ‘Paisley movement,’ as well as apartheid policies in South Africa, and the impact of the Rev Martin Luther King at the time of the Montgomery Bus Boycott.

The presentation will be followed by the release of later decades, concluding with a reflection on the 1990s and 2000s by the Archbishop of Armagh and Primate of All Ireland, the Most Rev John McDowell.

Archbishop McDowell said: “It is a great achievement that this worthwhile digitization project is being completed, enabling the journey of one Church community on the island of Ireland to be shared as widely as possible.

“Researchers can now explore this primary resource for themselves, and draw their own conclusions about the nuance and complexity of identity during this critical period. We trust it will encourage the Church community and others to look more critically at its past and how attitudes may have evolved through the Troubles and subsequently.”

Dr Susan Hood, Librarian and Archivist, said: “We are indebted to the Minister for Foreign Affairs, Mr Simon Coveney TD, and the Reconciliation Fund, for such generous support especially at this difficult time when small institutions like ours must restrict physical access to keep the public safe.

“We commend our service provider Informa who has worked so positively with us to deliver the incredibly fast and accurate search engine which is highly-valued by researchers, and we thank Dr Marie Coleman and all the subsequent Borderless Church