Consecration of the Rt Rev George Davison as Bishop of Connor 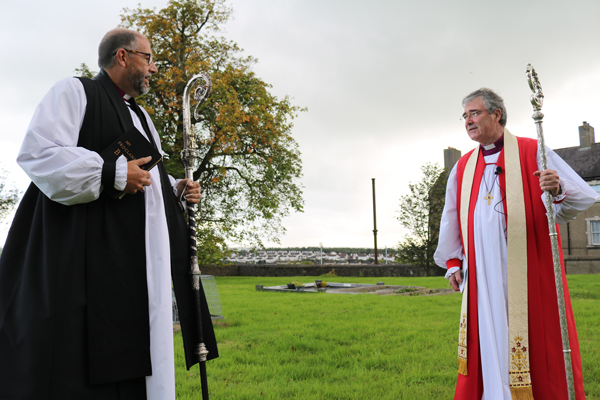 It was a Consecration Service like no other – rows of empty pews, no congregational singing, and liberal use of hand sanitiser before the individual laying on of hands – but at 5.30pm on Thursday the waiting was over for the Rt Rev George Davison – and Connor Diocese finally had a new Bishop!

Bishop George was consecrated on September 3 at a service in St Patrick’s Cathedral, Armagh, conducted under strict Covid-19 restrictions.

The former Archdeacon of Belfast and rector of Carrickfergus was appointed by the Episcopal Electoral College for the Diocese of Connor on February 17. His consecration had originally been planned for May, but was delayed due to the coronavirus pandemic.

In a video message to the diocese recorded on the eve of the Service of Consecration, Bishop George said: “This is a service that has been in planning for some time, a considerable time longer than any of us had realised.”

He continued: “That delay, of course, has been caused by the same coronavirus emergency that has turned all our lives upside down over the last number of months. As individuals and as a society, we face challenges that we have never had to deal with before. It has caused real heartache for many people, and for some, the challenges they have faced make the delay of a service feel very insignificant.”

The Bishop said that familiar ways of doing things had to be put on hold, and churches had to learn new ways to enable people to join together as the family of God.

“Even as we take these tentative steps back into our church buildings again, I am very conscious that we still have challenges ahead of us,” he said. “We have to be realistic about the challenges ahead, but I am convinced that they should not, and will not, define us.”

The service took place in the presence of a congregation of less than 30, when in normal circumstances several hundred would have attended. It was live-streamed on both the diocesan website and Facebook pages, and on the Church of Ireland Facebook page, so parishioners across Connor Diocese and beyond could follow the consecration.

Bishop Clarke’s sermon focused on the theme of leadership, and the image of bishops as shepherds.

Clergy wore masks or visors throughout the service, as did the congregation. Hymns were sung by cantor Adam Reaney, and the words were included in the order of service to allow the congregation to follow. The organist at the service was The Rev Canon Dr Peter Thompson, assistant organist of St Patrick’s, Armagh.

At the laying on of hands, Bishop George knelt while the Archbishop, the Bishops of Meath and Kildare, Down and Dromore, Derry and Raphoe, Bishop Clarke, and the Rev Sam McGuffin, representing the Methodist Church in Ireland, approached separately, having used hand sanitiser before they touched the Bishop’s head.

There was no hand shaking as the congregation offered peace to one another, only softly spoken words and a nod of the head, masks concealing smiles.

With such a small number present, the Communion took just a short while.

At the end of the service, the clergy moved outside for a socially distanced photograph, captured minutes before a burst of heavy rain.

Connor’s new Bishop was Archdeacon of Belfast since 2013, and has been succeeded as archdeacon by the Ven Barry Forde, Chaplain at Queen’s University.

He was ordained a deacon in June 1992 at a service in St Patrick’s Cathedral, Armagh, and served his curacy in St Mark’s Parish, Portadown.

In 1995, Bishop Davison was appointed rector of the Parish of Kinawley and Holy Trinity, Derrylin, Co Fermanagh, in the Diocese of Kilmore, where he remained until his institution as rector of Carrickfergus in June 2009. In Kilmore, he was Diocesan Director of Ordinands, and Archdeacon of Kilmore.

Bishop Davison is married to Nadine, and they have two grown up children, Erin and James.

The Bishop will be Enthroned in Christ Church Cathedral, Lisburn, and Installed in St Anne’s Cathedral, Belfast, on dates to be confirmed.

We extend thanks to our friends in Armagh Diocese for organising and delivering the live-streaming of this service.