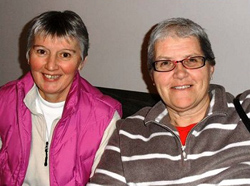 Gwen Carlisle and Mags Southern received honours for services to education in Paraguay. They were mission partners with SAMS Ireland for around eight years, following SAMS GB’s merger with Church Mission Society (CMS) in England.

Gwen and Mags were Senior School leaders in St Andrew’s College, Asuncion, for nearly 30 years. This school was founded by SAMS’ mission partners in the late 1960s and the women were part of the many developments of the school during this time. One of its past pupils is the current President of Paraguay, Mario Abdo Benítez.

Many Irish volunteers have gone to work at the school since 1990s and Gwen and Mags were frequent visitors to Ireland when on furlough in recent years to events like the SAMS Ireland Friday Night Live in Craigavon Civic Centre.

Most recently, Mags was due to assist a group from St Matthew’s Parish, Richhill, which was planning to travel to Paraguay last Easter, although had to be cancelled due to Covid-19.

The Rev Stephen McElhinney, Mission Director, said: “SAMS Ireland is very pleased that the scope and extent of Gwen and Mags’ educational work in Paraguay has been recognised in such a way and as such is well deserved.