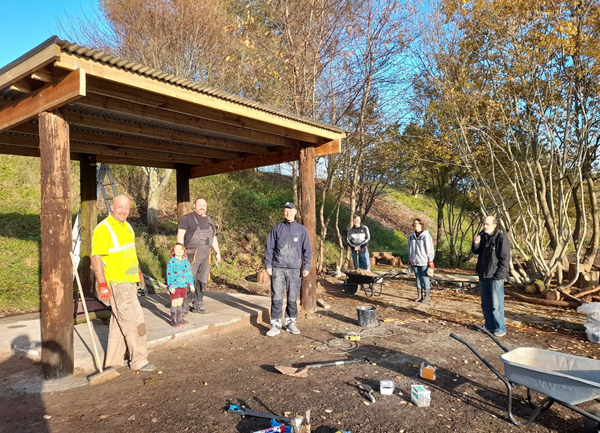 Volunteers beside the completed shelter in Glencairn Community Garden.

A derelict piece of land behind St Andrew’s Church in Glencairn, north Belfast, is being transformed into a vibrant community garden.

The work, driven by Stephen Whitten, Church Army Evangelist from Connect Base, Connor’s North Belfast Centre of Mission, has captured the imagination of the community.

Although Covid-19 has put a halt to many of the activities planned for the developing space, the work on the garden has continued throughout the pandemic.

And huge strides were made last week when volunteers came together to erect a new shelter which will provide a covered space for people to again come together.

Stephen, who is an experienced tree surgeon with a background in rural and countryside management and environmental science, is very much a ‘hands-on’ project manager.

He negotiated the purchase of the telegraph poles from a farmer on the hills behind Glencairn, and with the assistance of his team of volunteers, cut them to length and transported them to the community garden.

With all necessary hardware on site, Stephen oversaw the raising of the four poles to form the corners of the new shelter, on a cold but sunny November 4 morning.

“I was very glad to get them upright. It is great so many of these guys have come along to help. A local gardener also got involved,” he said.

A key player in the design of the shelter was the Rev Adrian Bell, Ordained Local Minister serving in Glencairn and Whiterock. Adrian has a background in joinery, and designed the shelter and oversaw its construction, getting stuck into the practical work. 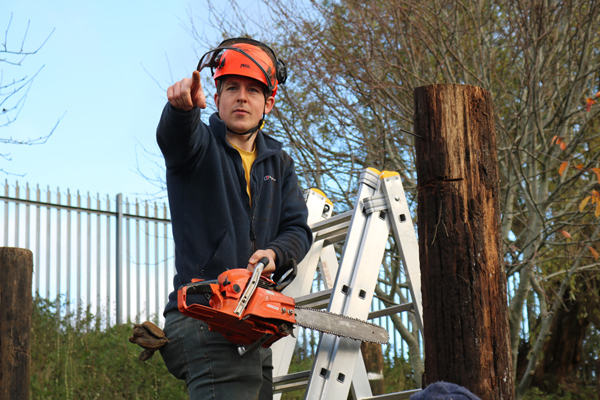 Stephen Whitten from the North Belfast Centre of Mission directing construction of the shelter on November 4.

Stephen said that due to coronavirus restrictions, early plans for events at the community garden had to be curtailed. These had included days when young people in the area came together to do furniture painting and building, and ‘Grub in the Garden,’ which was due to take place during Holy Week.

Once the new shelter, with its corrugated tin roof, is complete, it will be possible to hold training events in line with Covid-19 guidelines, as the shelter will open to the outdoors. A fire inside will allow the space to be used, whatever the weather.

Stephen hopes to run an Alpha course in the shelter in the near future. “I am just buzzing because it is great that this is finally happening,” he said.

Dean Sterling is one of the volunteers who has been involved in the work. He helped to cut the down the redundant telegraph poles further up the mountain and transport them to the garden. Dean is not in employment at present. “This has given me the chance to get out of the house,” he said.

His cousin Jack Cole was also helping out. “I am in the Army and am home every two weeks. I only live up the street and was happy to get involved,” he said.

Isaac Castle is the keyholder of St Andrew’s Church, Glencairn, and has lived in the area since 1966. The site, which is owned by the Methodist Church, was once a garden centre, but has been unused since the 1990s. “It just became derelict like a jungle. Just like the film Gorillas in the Mist,” Isaac joked.

Holes in the security rails left the site vulnerable to anti-social behaviour, but since October 2019, a transformation has been underway. By February this year, the site had been cleared with support from local councillor Nicola Verner, who arranged for road sweepers to come and clear the tarmac.

Trees which had been felled were turned into woodchip, which will be used for walkways in the new garden.

An area of land remains overgrown. Isaac explained that the plan is to turn this area in a nature garden. Low hanging branches of the existing trees will be cut back, and pathways created.

Sam Cole is a parishioner of St Andrew’s, and he and his family live adjacent to the church. He said his children, aged 17, three, four and five, are looking forward to having a safe new outdoor space next door.

“Glencairn is like a forgotten cul-de-sac,” he said. “When I was a lad there were shops here. The project is a good way of getting the community involved. Because of Covid-19, we have had limited numbers on the site, but we are hoping in future to raise money for a man shed and a polytunnel.

“Stephen is making a real difference in this community and this project will continue to grow.”

One of the regular volunteers is Emma-Jane Speers, who took up her post as Children and Outreach Worker at Woodvale Methodist Church just days before lockdown in March. “I got involved in the community garden back in June, and there have been a lot of changes since then,” she said. “We did all the clearing, and now it feels like we are getting to the bare bones of building.

“This will be somewhere children can experience the outdoors, where adults can meet other people and work side by side. I find that if I am doing something I can have a better level of conversation. This was just an empty space so it is great that it is being used for the community.”