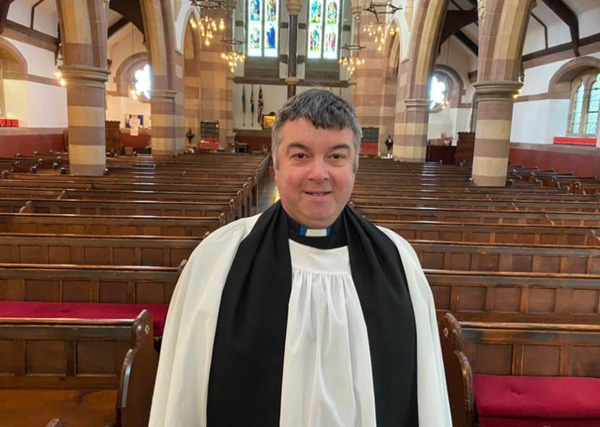 The Rev Christopher St John, curate at St Mark’s, Dundela, Diocese of Down and Dromore, has been appointed rector of St Nicholas’ Parish Church, Carrickfergus.

Born in Derry/Londonderry, Christopher, 54, moved at a young age to Newtownabbey where he was a member of the Church of the Holy Spirit, Mossley. He was confirmed at 13 and was involved in the emerging youth fellowship in the Church of the Holy Spirit. At 16, Christopher began attending a youth fellowship in St Bridget’s, Mallusk.

“The Gospel was presented in a way that connected with me and I became a committed Christian aged 17. I felt God calling me to the ministry,” he recalls.

Christopher, who has PhD in Adult Education, and a number of Masters’ degrees, worked for several years in adult education and child protection training, but seven years ago the call to ordained ministry that he first heard in his teens came back strongly.

After selection, and training at the Church of Ireland Theological Institute, he served his deacon intern year in Holy Trinity, Woodburn, Connor Diocese, before ordination as curate assistant in St Mark’s, Dundela, in August 2017.

Christopher married Andrea when they were both aged 21, and they live in Holywood. They have three children, all in their 20s – Karl is a company secretary; Chloe is a radio journalist and Melissa is training to be a nurse.

In his free time, Christopher enjoys ‘grappling sports,’ and has black belts in eight different martial arts, including a 4th dan In Judo and a 6th dan in Jujitsu. He speaks Spanish and Italian, and has a passion for Italian language and culture.

Christopher said: “I am really looking forward to the opportunities that will present for advancing God’s Kingdom and to being part of what God in planning in Carrickfergus.”

There is no date yet for the Service of Institution.