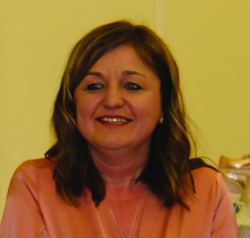 Aurelia Kelly, wife of the Rev Trevor Kelly, curate in the Parishes of Drumaul, Duneane and Ballyscullion, has been active making a difference in people’s lives throughout the Covid-19 crisis.

Aurelia has organised a number of Doorstep Drop Donation Appeals from her home since April this year. A Christmas Appeal is currently active, and will continue until Christmas Eve.

The first Doorstop Drop was for Ballymena Foodbank, with 550 items donated over the course of a week of sunshine. Neighbours, friends, family and the wider community left the donations in Aurelia’s garden as they walked past. 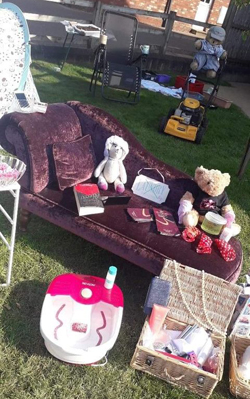 Her second project, which took place in August, was to gather supplies for newborn baby for the maternity unit at a hospital in Capetown, South Africa, where the world’s first heart transplant was performed in 1967.

Aurelia said: “My aunt, Liz Weir MBE, alerted me to this area of need and also twinned with me as a hub. At one stage, I couldn’t get out through my front door as it was blocked with donations including more than 1000 nappies.”

Project three was also the result of an alert from Aurelia’s aunt.  During September, she collected hygiene items such as shampoo, soap, nappies, shower gel, and toothpaste for a large refugee camp located in Greece which had suffered a fire and outbreaks of Covid-19. Aurelia said that again the donations flowed in. 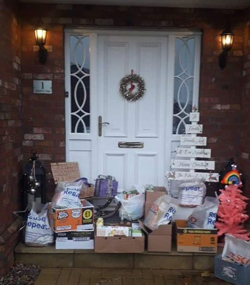 The Christmas Doorstop Drop Appeal began on November 12, and will receive donations of food items until December 24. Aurelia’s creativity is again a big draw.

“The front garden at our home is set up under the theme of a ‘Vintage Christmas at Home,’ including a full size teak reindeer, a vintage children’s sleigh, traditional signage, a Christmas Tree where children can hang their homemade decorations, a tractor tyre crafted into a holly wreath painted by myself with bottle green garage floor paint and styled by my friend Tracey Beare, a garage door turned into a snowman and other festive vintage items,” Aurelia explains.

She said that during the first week, an overwhelming amount of food items – almost 200 – had been donated.

“I have received numerous messages of support including a Facebook comment from a neighbour who wrote: ‘Seeing the lights in the garden really cheered me up on my way to my fourth night shift in Belfast.’

“The true spirit of Christmas is definitely happening here and permeating into the extended community too as a lady drove from near Ballycastle one night, a return trip of 60 miles, to donate.”

The donated food is given weekly to those in need. 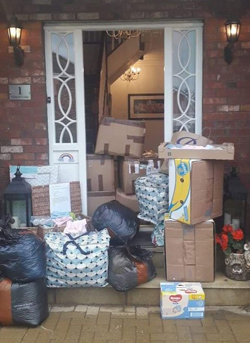 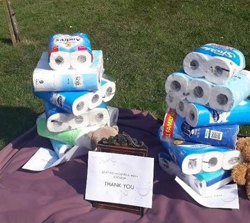 Aurelia added: “My 11-year-old daughter has been blessed by these projects too and was a great help designing the garden scape for ‘A Vintage Christmas at Home’ and the other projects too.”

Aurelia is also sharing daily writings – ‘A Journey through my Camera Roll in 2020’ – on her Facebook page.