‘No more 1 in 3’ is focus of Mothers’ Union campaign 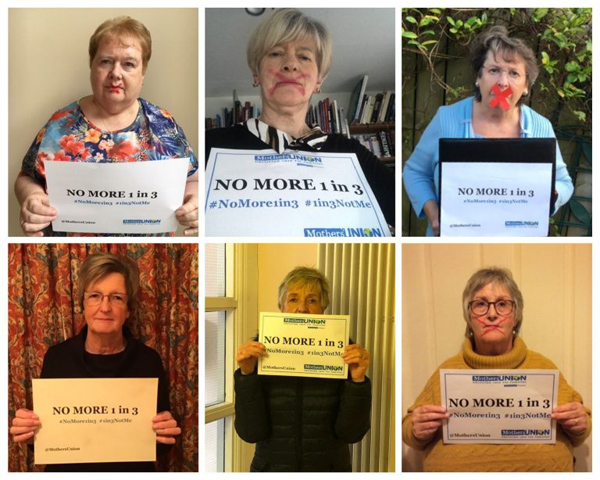 Members of Connor Diocesan Trustees and Executive show their support for the No More 1 in 3 campaign.

The Mother’s Union annual 16 Days of Activism Against Gender-Based Violence is an international campaign to challenge violence against women and girls.

The campaign runs every year from November 25, International Day for the Elimination of Violence against Women, until December 10, International Human Rights Day.

Combatting gender-based violence is at the heart of Mothers’ Union concern through advocacy, prayer and practical matters, and each year Connor Mothers’ Union takes part in the 16 Days of Activism campaign.

Due to Covid-19, no physical events are taking place in Connor Diocese this year, but members and friends are encouraged to take part in the many online events, as well as using the All-Ireland Mothers’ Union 16 Days Prayer Diary for their own private prayer.

In addition to highlighting the issues involved, it reveals the positive work taking place across the Church of Ireland in engaging with domestic abuse and gender-based violence.

Key online events organised as part of the 16 Days of Activism Against Gender-Based Violence take place on Global Day on December 5.

Global Day is centred around the disturbing figure that one in three women worldwide have experienced domestic or sexual abuse. Mothers’ Union, as a leading women’s organisation, believes this to be unacceptable.

Find out more about Connor Mothers’ Union at https://www.connormothersunion.org/