Angels of Faith, Hope and Love! 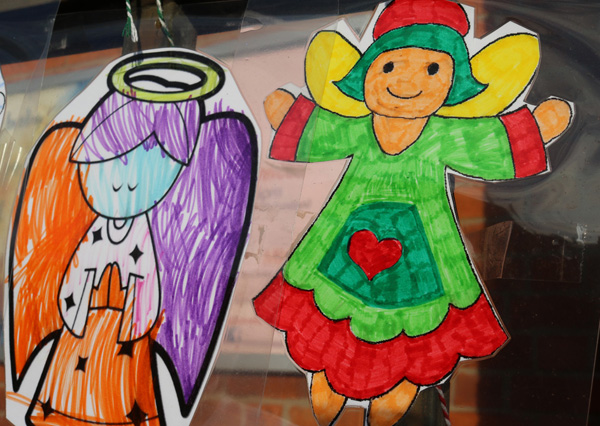 The railings of St Michael’s Church off Belfast’s Shankill Road have been transformed by the appearance of a host of angels – more than 100 in fact!

Each angel has the name of someone precious to the child or adult who decorated it on the back.

Children from Small Wonders Nursery and residents in Hemsworth Court were invited to take part in the project, along with members of the congregations of St Michael’s and St Stephen’s – decorated angels are also being hung on the St Stephen’s railings.

Staff in local businesses also took part and were given decorated angels to put their loved ones names on.

Members of the Neighbourhood Police Team helped to deliver angels.

On Tuesday December 15, the rector of St Michael’s and St Stephen’s, the Rev Canon James Carson, was joined by the Neighbourhood Police Team; the Rev Jack Lambe (Chairman of the Board of Governors in Malvern PS); the Rev Colin Duncan (a Governor in the School); Church Army Sister Karen Webb from Connect Base; children from Malvern PS, and school Principal Mrs McSorley to say prayers of thanks at the church for all the loved ones named on the angels. Prayers were also said for everyone in the local community.

Canon Carson said: “This is a lovely, visible sign of faith, hope and love at this difficult time and we hope you will take the opportunity to see the angels which have been so beautifully decorated and the lovely banner designed by Leah Batchelor.”