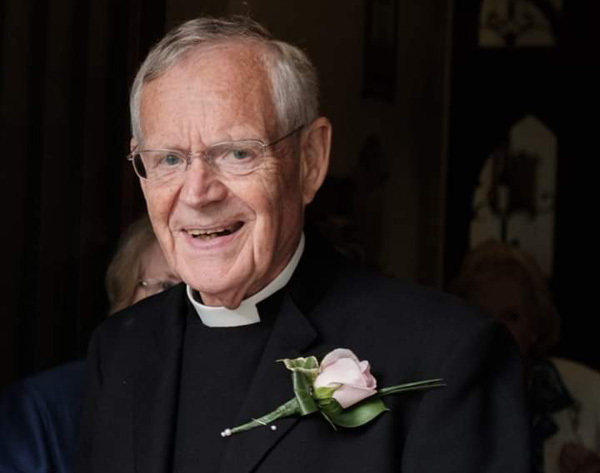 The late Dean Brian Moller’s life was one ‘packed full of interest and energy, activity and achievement over the course of 85 years,’ Canon Ronnie Nesbitt told the small congregation permitted to gather at the funeral service of the former Dean held in Bangor Abbey on January 19.

Describing Dean Moller as ‘one of God’s most faithful and devoted servants,’ Canon Nesbitt said he would have celebrated the 60th anniversary of his ordination this year.

“But there is a lovely sense of completion as we meet in that a parochial ministry that began 60 years ago in St Peter’s on the Antrim Road where Brian was appointed curate assistant should also have ended there as Brian gave his final address from its familiar pulpit on the first Sunday of this new year,” Canon Nesbitt said.

He spoke of Dean Moller’s contribution to the wider church at Diocesan and General Synods, as Dean of Connor, in filling for a time the roles of Director of Ordinands and Examining Chaplain in Connor Diocese. As chaplain to Stranmillis, Brian also had significant influence on a generation of teachers and ordinands,” Canon Nesbitt said.

He added that the Dean’s many other skills and interests made for a ‘well-rounded, interesting and above all entertaining personality.’

“Above all, Brian was a man of sincere and convinced faith in Christ, steeped in liturgy of the Church of Ireland of course! He was kind and generous, warm hearted and loving. Someone who invested himself in the lives of others. Like Barnabas, a ‘son of encouragement’, and as a friend or colleague, utterly dependable. Someone who laughed often.

“It is no surprise that his death has evoked such a deep sense of loss not just in this parish but in so many other places as well.”

Canon Nesbitt said Dean Moller was also one of the most determined people he had ever met, and someone who had known him throughout the length of his own ministry as one of those ordinands who found direction and encouragement from him.

Extending sympathy to Brian’s family, his sons Jeremy and Julian, Jeremy’s wife Elaine, and the wider family circle, Canon Nesbitt remembered the Dean’s beloved wife Kay. He said they were a clergy family, of the old school, in that holidays comprised of house for duty locums the length and breadth of Scotland and England.

“To say you will miss him is a huge understatement. But there is also relief that his passing into the nearer presence of God was peaceful and swift, and if it didn’t afford time for farewells – we know that Brian would have found any prolonged incapacity so very hard to bear.”

Canon Nesbitt said music and singing was Dean Moller’s ‘joy and delight’ adding that ‘his very fine tenor voice graced so many occasions both secular and sacred.’

He remembered that Dean Moller was brought up in Belfast, the son of Edward, a Danish-born marine draughtsman with Harland and Wolff, and Emily. On the Easter Tuesday of 1941, the family was caught up on the air raid on Belfast and as a six-year-old, Brian could remember being dug out of the rubble of his home by soldiers.

He grew up in Lisburn, studied at Friends’ School and his choral singing at Lisburn Cathedral was, Dean Nesbitt said, to foster a growing sense of vocation. “But not before noting Brian had a spell in stockbroking and, as a student, a conductor on the Blackpool trams, which was news to me, I must say!” Canon Nesbitt revealed.

He outlined how, aware of God’s call to the ordained ministry, Dean Moller commenced studies at Trinity College Dublin, followed by his Divinity Testimonium at the Divinity Hostel. After ordination, he served curacies at St Peter’s and in Larne, with particular responsibility for Craigy Hill. In 1968, he was appointed as curate-in-charge of St Comgall’s, Rathcoole, later rector, staying there until his appointment to St Bartholemew’s in 1986.

“It is the date of his appointment to Rathcoole that is significant, just before the beginning of the Troubles,” Canon Nesbitt said.

“Brian took on as his first incumbency a parish of 600 families, as part of the largest housing estate in Europe. And there he set the tone of his ministry which was characterised by careful preparation of worship allied with an assiduous programme of house-to-house visiting, where he got to know his people by name. He fostered leadership and took meticulous care of church property, often himself.

“During his time, the congregation grew, organisations flourished, the church was enhanced by the addition of stained glass from a disused church – Brian ever the recycler – a minor hall was built. But more importantly, Brian and by extension the church, was the salt and light in a community under huge stress. It was a costly ministry.”

Canon Nesbitt said that if St Bartholomew’s had been a complete change, Dean Moller’s priorities remained the same. “He maintained the highest standard of worship, valuing the parish’s choral and liturgical heritage, and here too he commissioned stain glass and undertook refurbishment projects,” Canon Nesbitt said.

“Alongside all that an increasing commitment to the wider church as Dean of Connor and through groups such as the Organ Scholarship Scheme and the Choral Union. The fact that we are able to hold our General Vestry before Easter is done to a bill introduced by Brian at Synod.”

He said that once the Dean eventually retired, he didn’t slow down, founding the Retired Clergy Association, being president of Friends’ Old Scholars’ Association, an enthusiastic member of Probus and, in latter years, an inveterate traveller.

He was always available for cover, something he loved, because he enjoyed people and the conducting of worship, Canon Nesbitt said.

“But above all he was a fixer and mender. We need look no further than the Bishop’s Crozier, mended by Brian when a former bishop, who shall remain nameless, got it stuck in a gratin in Down Cathedral. In fact Brian mended four croziers in all, in Connor and Down and Dromore Diocese.

“Brian also had the knack of mending people as well. It’s as a mender and fixer we will remember him here. Mender of so many things, lots of clocks, including the clock in the tower which was restored and upgraded in 2014 in memory of Kay.”

Concluding, Canon Nesbitt said: “We meet today in our recently refurbished church. Even if the scheme didn’t entirely please him, as he told me, he got fully behind it. He launched Inspire, based on the parable of the talents, handing out £10 notes and urging people to use it as able, no one could refuse him and he promoted it at every opportunity.

“It raised over £10,000 in the end, testimony to his enthusiasm, drive and the profound belief that God could be trusted and would bless that which was offered in faith. The God whom he had made the foundation of his life, the Saviour in whose steps he followed in the power of the Holy Spirit. Brian certainly didn’t bury his talent and Christ whom he knew as his saviour and Lord will, I have no doubt, greeted him with the words, ‘Well done good and faithful servant, enter into the joy of your master.’”