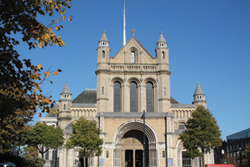 BBC Radio 4’s Morning Service on Sunday January 31 comes from Belfast Cathedral, and will be led by the Dean of Belfast, the Very Rev Stephen Forde.

The service will be broadcast at 8.10am and you can tune in via radio or online.

The theme of the Service is ‘Belfast, a City Shaped by the Sea.’ Also taking part are Dean’s Vicar, the Rev Canon Mark Niblock, and Gillian McGaughey, Diocesan Reader. The Director of Music is Matthew Owens and organist is Jack Wilson.  There will be a reduced Cathedral choir of four socially distanced sopranos.

Looking ahead to the service, Dean Forde said: “The cathedral parish includes the whole of Belfast Port, which has featured in many news reports about Brexit over the past month.

“January 31 is the anniversary of the sinking of the Larne Stranraer ferry, the Princess Victoria, at the mouth of Belfast Lough in 1953, when 135 passengers and crew, including all the women and children, were lost out of a total of 179.

“Thirty three of those lost on that day lived in Belfast, including the Deputy Prime Minister of Northern Ireland.”

Anyone who can’t tune into the service at 8.10am this Sunday will be able to listen again at the BBC Radio 4 online.