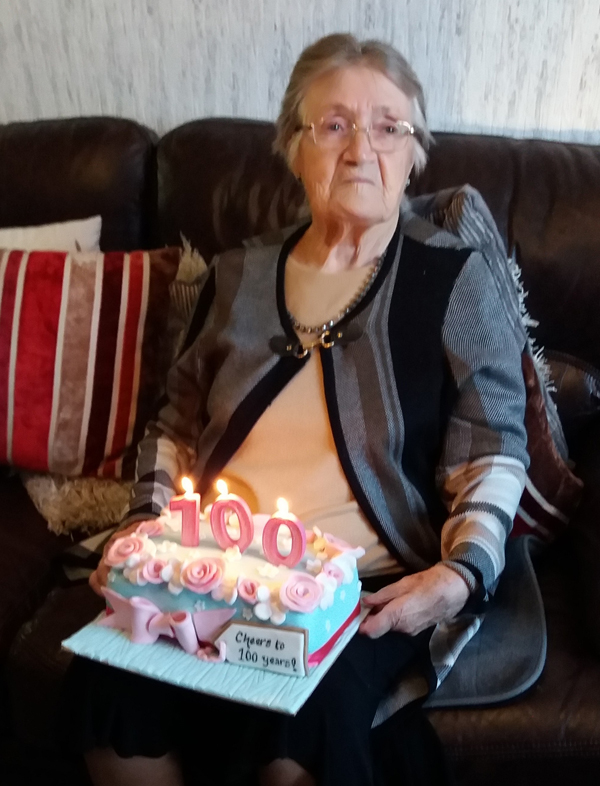 Her rector, the Rev Nicholas Dark, delivered flowers and a card on behalf of the parish, wishing Doreen a happy birthday from all her friends in church.

On the previous Sunday, December 13, during a recorded service which was broadcast on Youtube, the congregation sang ‘Happy Birthday.’

“We do hope she heard us!” Nicholas said. “I know that she had been told about our singing and was pleased that we remembered her in church.”

He said that before lockdown, Doreen was a regular in church. Doreen is also a committed member of the Senior Citizens’ club, which has not been able to meet for nearly a year because of the pandemic.

Doreen’s parents, John and Margaret Nettleship, brought Doreen to Magheragall Parish Church for baptism on Sunday February 27 1921, and Doreen has been a lifelong member of the Church of Ireland.

Doreen’s baptism record, which also records the date of her birth.

When Nicholas asked Doreen the secret to longevity, her response, he said, was simple – “God has been good to me and I thank God that I am well.”

Among Doreen’s many birthday cards were cards from Her Majesty the Queen, the Bishop of Connor, and the Mayor of Lisburn and Castlereagh.