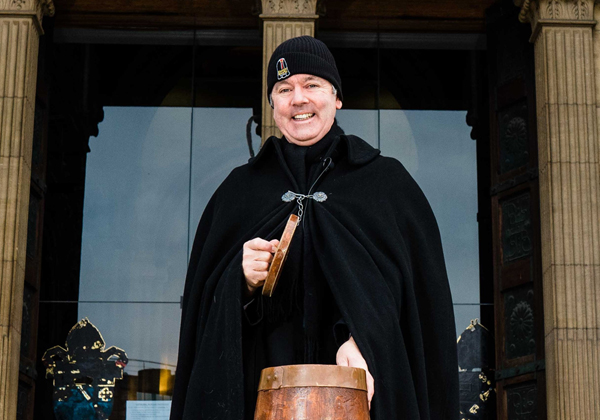 There was great news for charities across Northern Ireland with the announcement that Belfast’s Black Santa Appeal 2020 raised a whopping £230,000.

This will be distributed to 232 organisations working with the elderly, the young, people affected by unemployment and homelessness, mental health and the Arts. There is also a donation to Christian Aid.

“The total raised is quite amazing, given the challenges of Covid-19,” said Dean Stephen Forde, who has completed three years as Black Santa in a cathedral tradition dating back to 1976. “This figure does not include the small change coins which still have to be counted by the bank, nor the Gift Aid which will be reclaimed.”

The Dean expressed his gratitude to Price Waterhouse Cooper (PwC) whose online partnership, including the creation of a dedicated Black Santa website, had raised more than £21,000.

During the annual sit-out, which began on December 17 on the steps of St Anne’s Cathedral in Donegall Street and ended on Christmas Eve, Dean Forde was supported by the Bishops of Connor and Down and Dromore, Cathedral clergy and its Canons.

With the pandemic and Covid-19 restrictions, it was a somewhat different event compared to previous years. The pandemic meant each day had new challenges for the Dean.

Writing during his week on the steps of St Anne’s, Dean Forde said: “Each year, I pull on thick socks and boots to keep my feet warm. I tightly fasten the traditional black cloak which gives its name to Black Santa. But this year, there is more to do. I have to fix my face covering over my mouth. Somehow I have to stop my glasses from steaming up. I have to ensure 2m social distancing is maintained. It is all part of that strange new world we have entered.”

A spokesperson for PwC said: “It was an absolute privilege to support the team at the cathedral with the Black Santa 2020 campaign. Local charities have been facing huge funding challenges through the pandemic, and the needs of the people who require support are greater than ever.

“Being able to deploy the talent and skills of the people who work in our business, and give back at a time when people were struggling to work out how to give back, was the best gift we could have been given at Christmas 2020. On behalf of PwC, we are so grateful to the team at the cathedral for supporting us, working with us and trusting us to deliver a very ambitious project in a very short period of time!”

Funds raised by the Black Santa Appeal are traditionally distributed to charity representatives at the Good Samaritans Service, a special service held each year on the first Sunday in February.

“This year, because of the coronavirus restrictions, we are unable to make the presentations in person to each of the organisations at the annual Good Samaritans Service which was scheduled for February 7,” Dean Forde said.

“Instead, the awards will be sent directly to each charity so they can put them to use straight away. We are asking them to send us a photo, either of their organisation’s team, or of some of the work they do, and hope to create a photomontage in time for February 7.”

The Dean added that the online 11am Morning Service from the Cathedral that day will mark Good Samaritan Sunday, and will ‘celebrate what has been achieved this this year’s Black Santa Appeal.’

Dean Forde thanked everyone who had donated to this year’s Black Santa. “For every child, Christmas is about the power of hope,” he said. “The gift of a vaccine. The generosity of carers who will not give up. The resilience of our human spirit in the face of adversity. The giving of pennies that makes possible amazing work by a myriad of charities.”