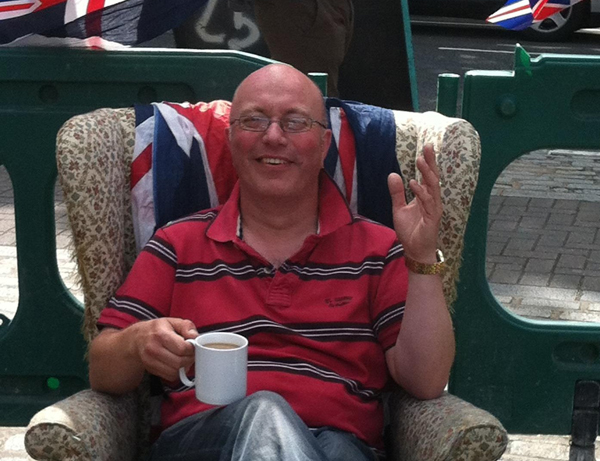 The Rev Derek Kerr, pictured at a street party in Fulham, London, celebrating the Queen’s Diamond Jubilee in 2012.

The Rev Derek Kerr will be delivering a live talk on Facebook this Saturday, February 6, as on this date, Her Majesty the Queen will have reigned for 69 years.

Derek, rector of Drummaul, Duneane and Ballyscullion Parishes, has a passion for all things royal, and is an avid collector of royal memorabilia. He has exhibited his collection in the past, and regularly gives talks on the occasion of key royal dates and events.

He was in London in 2012 for the celebrations marking the 60th anniversary of Her Majesty’s ascension to the throne, and attended a street party in Fulham. During that weekend, Derek was invited to preach at an Evangelist Jubilee Service in St Matthew’s in Fulham – his placement church when he was studying at Oakhill Theological College in the mid 1980s.

Derek plans to share his royal talk on a Facebook live stream beginning at 8pm on February 6.

“It’s not too serious and is a little educational, even if I do say so myself,” he said. “There are stories of others having met HM, a look at some royal memorabilia plus the story that goes with it, my two opportunities to meet HM, and then I will finish by remembering one infinitely greater than her.”

Derek added: “It will be strange not having an audience to bounce off and interact with. There is normally plenty of laughter, so I don’t know how it will come across but I hope it’s fun.”

You can tune into Derek’s talk this Saturday at 8pm via his Facebook page.