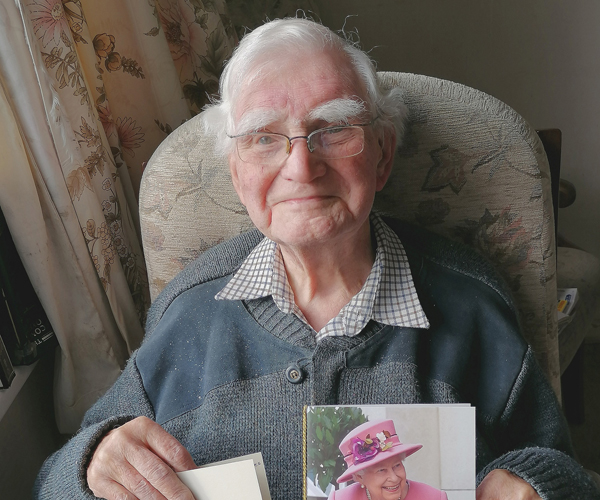 Many congratulations to Billy Adair, who celebrated his 100th birthday on Tuesday February 16.

Billy, a lifelong parishioner of St George’s, Belfast, and well-known church organist, lives independently, and after a stay in hospital and respite care due to post-Covid complications just after Christmas, he was back home to start his special day opening his birthday cards.

Billy’s daughter Gill Adair said he had been thrilled to receive cards from Her Majesty the Queen, the Lord Lieutenant and the Bishop of Connor, Rt Rev George Davison. There were also cards from the Ulster Society of Organists and Choirmaster and one signed by former choir members of St James’ Parish Church, now part of the United Parish of St Peter and St James, in Belfast’s Antrim Road.

Gill said the highlight of Billy’s day had been a video call with his wife Dorothy, who is currently living in a care home.

Although his heart is in St George’s, St James’ Church, which closed in 2008, is also very special to Billy, as he was organist and choirmaster there for more than 20 years. After the building closed for worship, Billy continued to play the organ in different churches including evening service in St Mark’s, Dundela, until he was aged 94! Gill said he still enjoys writing articles for the St George’s parish magazine.

Leaving school at 16, Billy worked all his life with the textile firm of William Ewart and Son. His relationship with music pre-dates even his business life. In an interview for Connor Connections in 2007, he explained how he came to play the organ. “When I was 15 I had a friend, Arthur Martin, who was a well-known teacher of organists and choristers at the Shankill Road Mission. I became his apprentice more or less by teaching myself the organ. I ended up doing most of the organ playing in those days and eventually decided I must have proper organ lessons.” 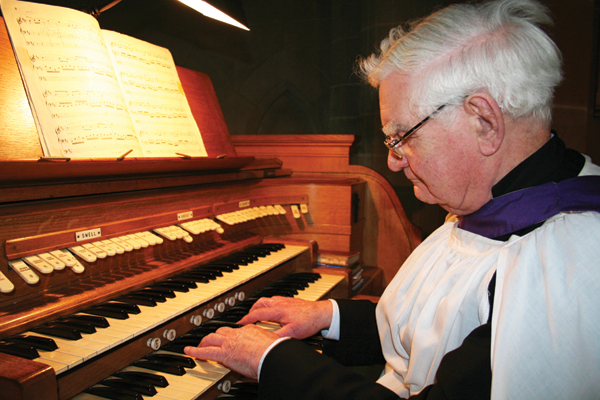 Billy Adair plays the organ in the former Church of St James in Antrim Road, Belfast, back in 2007, shortly before the building closed and St James’s united with St Peter’s.

He went to classes run by Capt CJ Brennan, organist at Belfast Cathedral, and his first church appointment was when he was 18, in St Michael’s, Shankill Road. From there, Billy went to St Patrick’s in Jordanstown, and later moved to St John’s Parish, Malone, with its all-male choir, where he stayed 14 years.

After a time in Lisburn Cathedral, he moved to St Mark’s, Dundela, where he played at the 10am service on a voluntary basis for 15 years.

Soon after he retired from business in February 1986, Billy took on the job of organist at St James’s.

“An organist’s job is time consuming,” Billy said in 2007.  “It takes a lot of thought and preparation for the music at each service. It requires tact as well as musicality in handling choir practices.” 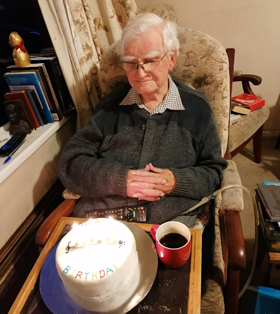 Billy enjoying his 100th birthday cake made by his granddaughter Helen.

Gill says Billy continues to enjoy good health after having a triple heart by-pass and a pacemaker fitted 22 years ago.

Billy and Dorothy are parents to  Gill and her brother Stephen, and grandparents to Aaron and Helen.

The Rev Brian Stewart, rector of St George’s Parish Church, described Billy as ‘a treasure.’ “He is gentle, devout and a lovely man to have around the place,” said Brian.