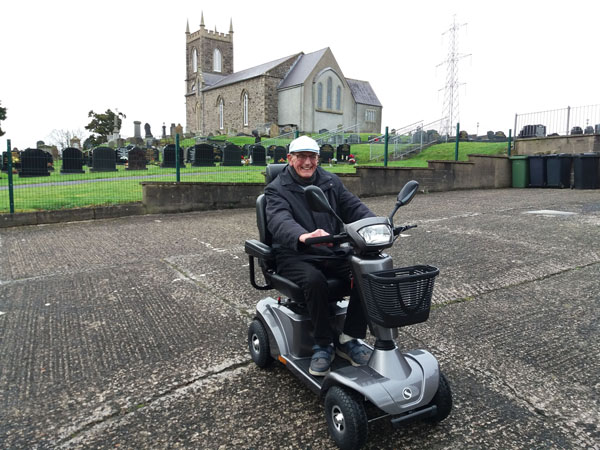 Oliver Weir trying out his new ‘Ferrari’ in the car park at Magheragall Parish Church.

Oliver Weir, well known for cycling from Lisburn to Magheragall Parish Church morning or evening in all sorts of weather, has a new set of wheels!

The rector of Magheragall, the Rev Nicholas Dark, came upon Oliver in the church car park on January 17. Oliver explained that he was trying out his new wheels – he wanted to see if he could make it to the top of the hill at the back of the church so he would be ready for when the church reopens.

Nicholas said: “Judging by the test run, which was a great success, he will be out when we reopen. I would think, given the gradient of the hill, he could pick up a few passengers any Sunday!”

Nicholas added: “On leaving the car park for home, I asked Oliver what the top speed of his new vehicle was, to which he replied that his new ‘Ferrari’ could do up to eight miles an hour!”