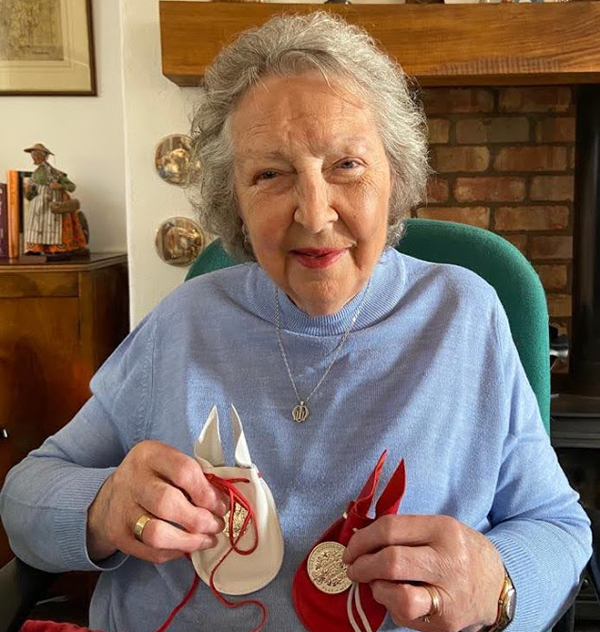 Mrs Paddy Wallace, a parishioner of All Saints’, Antrim, with her Maundy Purse.

Congratulations to Mrs Paddy Wallace, a parishioner of All Saints’, Antrim, who today received the gift of Maundy Money from Her Majesty the Queen.

Sadly, due to the Covid-19 pandemic, Paddy will not have the opportunity to receive the Maundy Purse in person as, in keeping with arrangements last year, it has been sent to recipients in the post.

By tradition, Royal Maundy takes place every year on Maundy Thursday. The reigning monarch gives a gift of money to the elderly – to one man and woman for each year of the monarch’s life – that’s 190 purses this year! In days gone by, they would also wash the feet of the poor in memory of Jesus washing the feet of the Disciples, but that hasn’t happened since the late seventeenth century.

The recipients are chosen from the local community and, in normal times, distribution of the Royal Maundy takes place at a different cathedral each year.

Paddy was nominated for the Royal Maundy by the Bishop of Connor, the Rt Rev George Davison. Her citation reads:

“Paddy has been an active member of the parish of All Saints’, Antrim, for many years. Over those years she has served diligently and humbly in a number of roles. She is well-known throughout the diocese and the whole Church of Ireland having served firstly as Connor Diocesan President, and then as All-Ireland President of the Mothers’ Union. In these roles she endeared herself to many across the island with her unique blend of warmth, encouragement and professionalism.

“At the first parish branch meeting after Paddy was elected as All Ireland President of the Mothers’ Union, she told the members that her most important role was still being a member of All Saints’, Antrim, Mothers’ Union.

“This is but one example of Paddy’s humility. Over the years she has exercised a ministry of encouragement and hospitality to her vicar, and other clergy and many of the parishioners.  Even when holding high offices in the Mothers’ Union, she always found time to fulfil many more everyday commitments in the parish such as arranging the Flower Guild.

“Paddy’s working life was that of a teacher. In the 1980s she was promoted to the role of vice-principal of Parkhall College, Antrim – one of the three secondary schools that then served the town. As such, she was a member of the senior management team that raised the school from being Antrim’s third ranked secondary school to first position in the same rankings.

“An enlarged Parkhall is now the town’s sole secondary school and it is thriving.  Its success is largely due to the foresight of that senior management group, to which Paddy made a significant contribution.”

Paddy says the gift of Maundy Money from Her Majesty the Queen was an honour.

Paddy, 80, is married to John and the couple have three sons. She said news that she was to receive Maundy Money had been very exciting. “I was quite overawed. I did not expect it in the slightest. I am very honoured,” she said.

Paddy is currently on crutches following a hip operation. “This has really boosted me for I was feeling a bit down,” she said. “John is really pleased because he knows I have done a lot over the years.”

She said much of her work in the local community came about through Mothers’ Union. “We have been involved in community organisations that support families, and others are continuing that work,” she said.

Receiving her Maundy Purse in the mail is not quite the same as taking it from the hands of Her Majesty. “I would have loved to meet the Queen, and I am sure I could have managed to travel in a wheelchair, but it is just lovely to have received the honour,” Paddy said.

As has been a Connor tradition in relation to the Royal Maundy, Bishop George also nominated a member of another denomination, and this year that nominee was Mr Dougie Crowe from the Presbyterian Church in Ireland.

Dougie, 75, was brought up in north Belfast before a move to North Down, but his heart is still in north Belfast and especially the local Carrs Glen Community, an area with many challenging social issues.

Dougie is a lifelong member of Eglinton Presbyterian Church where administrative skills honed during a professional career in the insurance business were put to good use in his service to church and community. He has been Clerk of Kirk Session for 22 years.

He has been a long-time member of the 92nd Belfast Company of the Boys Brigade, serving as an officer for more than 50 years – including 11 of those as captain of the company.

Dougie is also a member of Eglinton Men’s Indoor Bowling Club which provides a valuable opportunity for men of the church and community to meet.

Totally committed to the wider work of the Presbyterian Church in Ireland, Dougie uses his professional skills to great advantage in committees, boards and councils of the church, most often in areas of administration and finance. He retains a great passion for the United Appeal for Mission and serves as a trustee of the Presbyterian Church in Ireland, as well as serving as Chairman of PCI’s Pension Trustees.