Prayers for peace in north Belfast 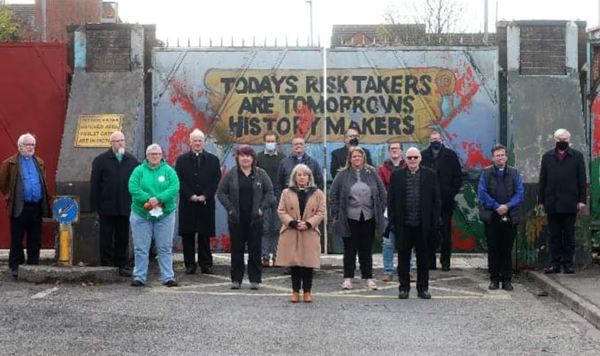 The Rev Tracey McRoberts, rector of St Matthew’s, Shankill Road, front centre, with representatives of different denominations who attended a Prayer Vigil in north Belfast on April 9. They include the Bishops of Connor and Down and Dromore, and Roman Catholic Bishop Noel Treanor.

Clergy in the Shankill area took to the streets last Thursday night to pray for peace in the midst of scenes of rioting. The following day, a Prayer Vigil was attended by representatives of different denominations, among them the Bishops of Connor and Down and Dromore and Roman Catholic Bishop Noel Treanor.

The Prayer Vigil, held at Forth Spring Community Centre in Springfield Road, was organised by the Rev Tracey McRoberts, rector of St Matthew’s Parish, where much of the violence had been focused, and the Rev Martin Magill, Parish Priest in St John’s, Falls Road, at the suggestion of their bishops.

Trouble on Wednesday night saw a bus being burned out just outside St Matthew’s Parish Hall. Tracey said she had offered to go onto the streets that night, but was advised against it.

The following night the trouble was centred on the interface at Lanark Way, again in St Matthew’s Parish. Tracey, accompanied by the Rev Canon Jim Carson, rector of nearby St Stephen and St Michael’s Parish, and the Rev Colin Duncan, minister of Woodvale Methodist Church, walked from the Ardoyne Roundabout to Lanark Way. 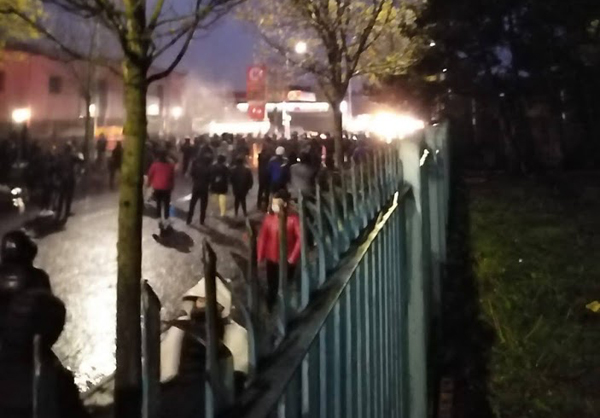 Disturbances in the Shankill Road area on Thursday night, April 8.

“We were just a presence on the street and spoke to people who were spectating,” Tracey said. “I didn’t think about my own safety at the time. We wanted to show that we were there. We did not speak to those involved in the rioting. You are unlikely to get through to these young people when they are in that frame of mind. Sadly the Church holds little sway with them.

“The people who were watching said they could not sleep because of the noise and felt safer being outside knowing what was going on than staying in the house. I didn’t come across anyone who was encouraging the violence, people were saying ‘isn’t this dreadful.’”

Jim Carson said the main focus of the walk on Thursday evening had been to pray for calm and peace, and wearing their clerical collars had provided opportunities for the clergy to interact with people. He said the experience of being out in the streets that night was ‘quite surreal.’ 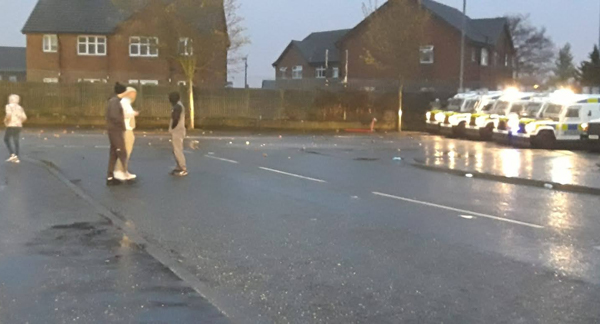 Scene in north Belfast on April 8.

The Prayer Vigil on Friday April 9 was held indoors and met all Covid-19 regulations, with participants maintaining social distance and wearing masks. These were only removed for Press photographs.

Welcoming those present, the Rev Colin Duncan, of Shankill and Woodvale Methodist Church, said: “Here we are together and we’re here to give a show of unity that together we are making a stand and a voice against the violence that we’re seeing on the streets, a violence that serves no practical function or purpose at all.”

The clergy walked together from Forth Spring Inter Community Group on the Springfield Road where earlier youths had been throwing petrol bombs, fireworks and missiles at the police, to the gates at Lanark Way, scene of violence two nights before. Poignantly the clergy had to make their way to the gates from both sides of the peace wall as they had been closed.

The Bishop of Connor, the Rt Rev George Davison said: “Churches on the ground in this part of the world and right throughout the province where there have been various situations, they are our communities.

“We simply want to encourage the local Christian communities to play their part and to seek to be what influence they can be.”

Roman Catholic Bishop Noel Treanor described the vigil as ‘a contribution on the part of us as church leaders to the local clergy who have been on the streets during these events.’ 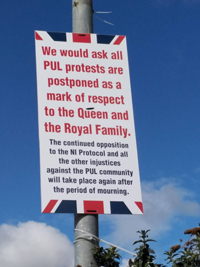 Following the death of HRH Prince Phillip on Friday, notices were posted that protests would be postponed until after the period of mourning for the Duke as a mark of respect to the Queen and the Royal Family.

Tracey, whose rectory is close to Twaddell Avenue, a flashpoint in earlier Loyalist protests, said she will take each day as it comes in respect of further trouble. “When you live in this area you learn to take things as they come. There were times during the flags protest when the trouble felt much closer to home.

“Throughout the period of national mourning, after politicians talk and schools are back, we will have been praying against violence. Living in this area I have seen prayers answered many times.

“Other times things have kicked off when you least expect it. When you cannot predict a situation I do not allow myself to worry about it.”

A camera crew from CNN visited St Matthew’s on Sunday morning to film parishioners paying their respects to His Royal Highness Prince Philip.  “They wanted to come to the place where the trouble took place as they were already filming in the area.

“We wanted to show them that the Shankill Road is filled with lots of good people who are more than welcoming and the vast majority don’t want to go back to the days of violence on our streets,” Tracey said.