Donegall Street in the wake of the blitz, with Belfast Cathedral in the background. Image shared in partnership with the NI War Memorial and the Belfast Telegraph.

The 80th anniversary of the Belfast Blitz will be marked in Belfast Cathedral on Friday April 16 at a special service of Choral Evensong.

Members of the public are invited to attend the service which begins at 5.30pm, and will be live-streamed on the Cathedral Facebook page.

A second attack came three weeks later, on May 4/5, when 200 bombers launched a raid that lasted three hours. More intense than the Easter raid, it devastated much of the city’s industrial heart in the dock area as well as parts of east Belfast and the city centre – Belfast Cathedral was fortunate to escape.

In the course of the blitz, more than 1,000 people lost their lives, or were declared ‘missing presumed dead’ – among them were 400 women and children. Half the city’s houses were destroyed or damaged. Officials estimated that, as a consequence of the air raids, by late May 1941, 220,000 persons had evacuated from the city (about half of its population) due to panic and fear.

Music at Friday’s Evensong in St Anne’s Cathedral will include the Introit:  They shall not grow old as we  by Douglas Guest, Preces and Responses  by Richard Ayleward, a setting of  Psalm 23 by Walford Davies, canticles to  Philip Moore’s Fauxbourdon Service setting, and the Anthem will be Sir Charles Villiers Stanford’s Justorum animae.

The service will also feature eye witness accounts of the evening, kindly provided by the Northern Ireland War Memorial. 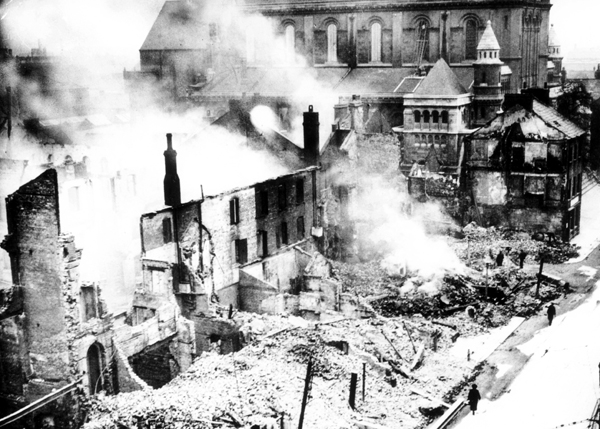 The area around Belfast Cathedral in ruins following the bombing. Image shared in partnership with the NI War Memorial and the Belfast Telegraph.