The death of His Royal Highness Prince Philip, Duke of Edinburgh, on Friday April 9 prompted the Very Rev John Bond, former Dean of Connor, to revisit his personal ‘Book of Memories.’

Dean Bond met the Duke on several occasions, including at a Garden Party in Hillsborough Castle on June 24 2014, where the Duke closely examined the Dean of Connor’s Insignia (gifted by Dean Fair’s family in his memory).

Dean Bond, who also met the Duke during a separate visit to Armagh, attended an In Service Course at Windsor for a month, living in the salubrious surroundings of Windsor Castle. These courses were set up by the Duke of Edinburgh for the clergy and the caring professions.

Dean Bond said: “I also represented the Church of Ireland at the opening Service of the General Synod of the Church of England in Westminster Abbey and later in Church House in 2015 in the presence of Her Majesty the Queen and the Duke of Edinburgh.”

He added: “The Duke was a great character and will be sorely missed by Her Majesty the Queen, the Royal Family and the numerous organisations of which he was Patron. We give thanks for the achievements in his life and his legacy.” 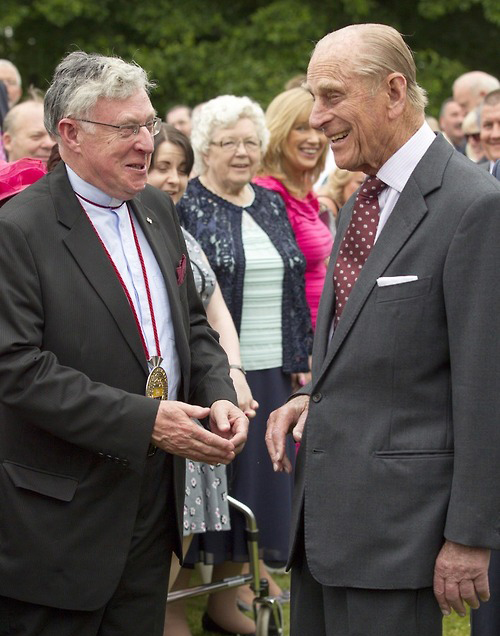 Dean John Bond chats with the Duke of Edinburgh at a Garden Party at Hillsborough Castle in 2014.