Funeral service for the Rev John Anderson held in Derrykeighan 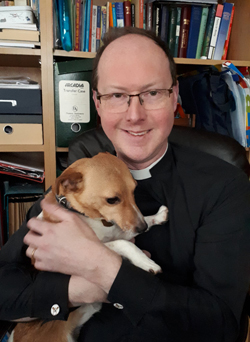 The late Rev John Anderson with his dog Rusty.

Speaking at the funeral service for the Rev John Anderson in St Colman’s Parish Church, Derrykeighan, the Bishop of Connor, the Rt Rev George Davison, paid tribute to John’s sense of commitment, his intellect, warmth of character, wit and devotion.

These, Bishop George told the private family service, were just a few of the things that stood out about John – things people would be thinking about as they remembered him.

John, who was rector of Billy and Derrykeighan for almost 16 years, died suddenly from Covid-19 on Saturday April 17, having taken ill just over a week earlier.

His remains were received at Billy Church on the evening of Monday April 19, where he rested before being moved to St Colman’s, Derrykeighan, the following evening (both conducted by the Rev Malcolm Ferry).

The funeral service took place on the morning of Wednesday April 21 in St Colman’s, before John was laid to rest in the adjoining churchyard.

Sincere sympathy is extended to John’s wife Eleanor, their children Simon, Hannah, and Emma, his mother Jean and his brother Philip. He was pre-deceased by his father Don.

Full Address by Bishop George Davison at the funeral of
the Rev John Anderson : April 21 2021

Less than two weeks ago, John Anderson wrote these words:

“This is Easter week when we can all have the assurance and the comfort that Jesus Christ left behind an empty tomb. Those who believe in his victory over death know the grave but to be a gate to a fuller life.”

He was writing in the context of a Facebook post expressing sympathy on behalf of the parish to HM Queen on the death of the Duke of Edinburgh. None of us knew just how poignant those words would be, nor that we would be gathering as we are for John’s own funeral service today.

As we gather as a family, still in shock and grief, I hope that we might simply do two things today.

Firstly, give thanks to God for all that was good and lovely in John’s life, for all that he meant to so many people, but particularly for who he was to you as a husband, dad, son, brother.

But also, that we might listen to that message of resurrection hope that John devoted his life to proclaiming and find hope in the midst of our sorrow.

This morning, I don’t intend to try to tell John’s life story, for you knew him far better than I did, but I do want to pick out just a few things that I think stand out about him, things that I know many people will be thinking about as they remember him.

Commitment – John was a churchman to his core. From his early days growing up in St Peter’s in Londonderry (under the tutelage of the late Leslie McConachie) as he grew and matured from boy to man, it was obvious to all that John’s faith and his commitment to Christ and his church was leading him to a lifetime of service in the church. Whether as curate in Magherafelt or Ballymena; as rector here in Billy and Derrykeighan, John gave of himself unstintingly. He did that in every aspect of his ministry, whether he was engaged in big projects like the substantial renovation of this church building; or special events like the visit of HM the Queen and Prince Philip to unveil the statue of Billy parishioner Robert Quigg VC in 2016.

These special projects brought him great satisfaction, but John demonstrated that same commitment in the everyday work of a clergyman, leading his people in worship, sharing in their joys and sorrows and the ordinary business of building relationships visiting people in their homes.

Intellect – John had great appetite for reading and thirst for knowledge. Not just in formal learning, though he showed aptitude for that in his gaining of a BD from Queen’s University and an MPhil from the Irish School of Ecumenics in Dublin. But John’s thirst for information and learning was an everyday thing – he was never without a book, even this past week in hospital and he was always picking up new information. So it was that his talks and sermons and his conversation were so interesting, peppered as they were with little nuggets of information that he had read and stored away, ready to share at the right time.

Warmth of character and wit – John had a great sense of humour – quirky at times – that endeared him to many people. So many people have spoken over the last few days about his kindness to them, about his friendliness and his sense of humour, and about how they will always be grateful to John for the way that he has played a supportive part in their lives, whether in difficult days when they have known sickness or bereavement; as he helped them celebrate significant moments in their lives; or simply enjoyed those pastoral calls that he made to them as their minister. John was a faithful priest and pastor and that warmth and wit meant that he was one who touched people’s lives deeply.

Devotion – John might have joked with you that he was married to ‘Ekklesia’ (as he referred to the church) as well as to Eleanor, and he was certainly committed to serving the people of his parishes, but there can be little doubt about his devotion to his family.

From those early glances between a curate and a choir member across the chancel of St Patrick’s, Ballymena, through a memorable trip to Edinburgh to get engaged, John’s relationship with Eleanor grew and flourished. Over 16 years of marriage he has proved himself as a caring and supportive husband and then when Simon and Hannah and Emma were born, a loving dad too.

But you have been a team, a family whose skills and abilities complemented one another. How would a confirmed technophobe like John have managed without you at his side to record his talks and upload them to Facebook for him over the last year?!

You have described John as ‘your rock,’ the one that you could depend on, but I’m sure that John would be the first to acknowledge that you were his rock too!

And when relationships have been so good, so strong, it’s all the harder when they are taken away from us. That’s why a day like this is so hard, for all of you, his family, who shared life with John so deeply.

I want to share with you a few thoughts from that passage from John 14 that Simon read for us a few moments ago.

Jesus was speaking to his disciples, preparing them for what was about to happen in their lives – a day when they would be suddenly bereaved. They would be shocked and hurting as he was suddenly taken from them and die on the cross on Good Friday.

As he speaks with them, he reminds them of the most important thing that he wants them to remember in that moment. Using the imagery of a great heavenly home, Jesus speaks to them of life beyond the grave – resurrection life – hope and reunion in the place that Jesus himself is preparing for those who trust Him.

As Jesus speaks, Thomas honestly tells him that he doesn’t really understand what Jesus is talking about. “We don’t know where you are going, so how can we know the way?” Like Thomas, we don’t understand all the hows and whys of God’s plans and purposes. Why has he taken John from us at this time? No doubt we have been crying out to God, asking him that question in our prayers these last few days. I have no answer to that question today, and truthfully, we probably won’t know the answer this side of heaven.

But I take comfort from the words that Jesus speaks to Thomas as he says to him, ‘I am the Way and the Truth and the Life, no-one come to the Father except through me.’ It’s as if he’s saying to Thomas, don’t worry about that, I’ve got that covered, you just keep on trusting me, walking with me, and I will get you there.

By his resurrection on Easter Day Jesus demonstrates his power over death and the authenticity of what he says, and brings hope to the lives of his hurting disciples.

Like many others, I have been struck how, though he didn’t know it at the time, the last days of John Anderson’s life were spent sharing that message of resurrection hope. The thoughts that he shared on the parish Facebook page encouraged people to understand what he believed and had given his life to.

Trusting in the love of his Heavenly Father and the forgiveness and resurrection life that those who look to Jesus find was what John Anderson believed and it is now a reality that he knows in God’s nearer presence. It’s my prayer that those same things will be ours too, and will sustain us in the challenging days ahead.