Ben set for the open road in his self-built campervan 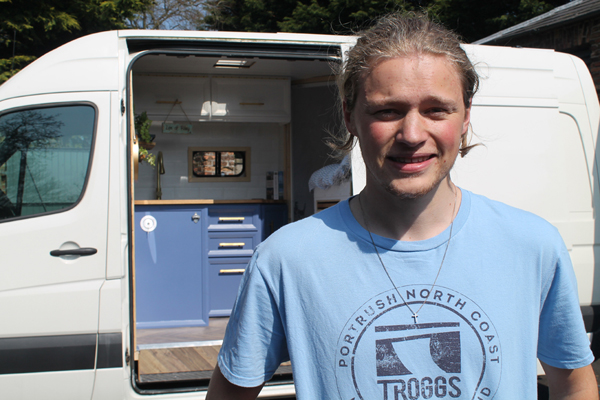 Ben Sweeney designed and fitted out his own unique campervan during lockdown.

Ben Sweeney is set to cruise away from the rectory in Ballymoney in his self-built campervan to enjoy the freedom of the open road and the call of the waves.

The 21-year-old Queen’s University student – he is doing Product Design Engineering – has spent much of the past year converting a white panel van into a comfortable and practical motorhome for one. (See our photo gallery below).

Ben, son of the Rev Andrew Sweeney, rector of Ballymoney, Finvoy and Rasharkin, and his wife Cathy, helped his dad to build an impressive pergola in the rectory garden at the start of lockdown last year, and this project has arisen from that.

“When we finished, Dad said I needed another project, and once my exams were over I had the whole summer,” Ben explains.

“I love surfing and had been thinking about this for a while, taking my inspiration from Vanlife and YouTube.

“I bought a 2009 white panel van, completely bare inside. These are quite hard to come by in Northern Ireland, but I got this in Antrim.  Before starting work, I did lots of research. The first couple of months I did a lot, but didn’t see much progress, it was mostly getting any rust sorted out and installing the pre-wiring for the electrics which are all solar powered.”

Ben indicates solar panels on the roof of the van. “These charge the batteries to power everything, including the lights, fridge, water pump and cooker. I want it to be completely off the grid,” he says.

“A lot of people use gas in their vans, but I didn’t fancy driving around with a gas bottle in the back. Sizing the whole power system was quite tricky – you have to try and predict your usage to get the right battery etc.”

Ben is endeavouring to be as eco-friendly as possible. “I have used sheep’s wool to insulate all the cavities, and insulation boards on the floor and panels,” he explains.  “I found out the hard way that I needed to put in a vapour barrier. Because this is a steel box, when it is cold outside and warm inside, there is a lot of condensation. This was something I hadn’t heard about, until after I put the cladding on the roof and then found it literally dripping one morning. I had to take it all off.” 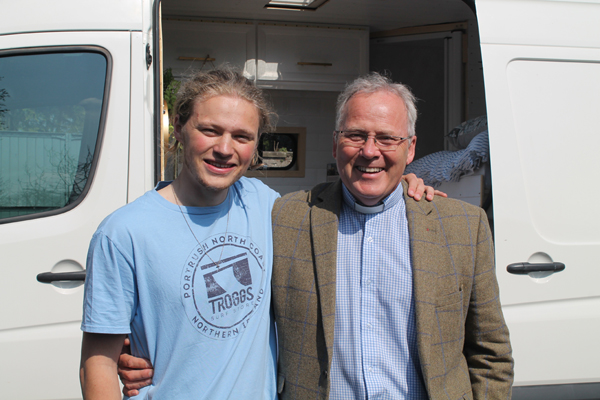 Ben helped his dad, the Rev Andrew Sweeney, build a pergola in the rectory garden last year, and went on to fit out his own bespoke campervan.

Another early job was putting in a window and skylight, which Ben says proved quite tricky, then he set about planning what he wanted inside the van. “I ordered a fibreglass shower tray from a man in Liverpool who makes these especially for vans. It was one of the first things to go in as you have to build everything else around it. There is a shower and space to add a composting toilet,” Ben points out the toilet area down the far end of the cubicle. The space is small but very fit for purpose.

Running alongside the enclosed shower / toilet area is a raised single bed, made up and ready for use. “I wanted a fixed bed rather than putting in seats that convert to a bed,” he explains.

Other fixtures include a two-ring induction hob, a fridge which is cleverly stored under the bench seat which is in turn stored under the bed when not in use. There are cupboards above the bed and drawers and cupboards in the very smart and cosy kitchen. Not to mention plants, books, a clock and a mirror, making it all very homely.

“When you design something like this, you have to decide if you want hot water.” Ben opens a low level cupboard in the kitchen area to show an electric water heater. Another cupboard hides a 70 litre tank which is filled when needed using a hosepipe. Everything is powered by the batteries stored inside the rear doors, and these are powered by the sun.

Ben has used the free space above the cab of the van to put in a storage shelf – decorated with an artistic wave symbolising his love of surfing and the sea. The van is almost complete.

“Last summer I thought that this year I would be travelling in Europe, but for now, if things open up, I will go on a trip around Ireland, or shorter trips to the north coast,” Ben says. “I am planning a trip to Cornwall in September and hope to get to Donegal a few times before then.”

The cab of the van seats the driver and two passengers, and although the van has only one bed, Ben’s friends can easily pop a tent on board.

The whole experience of fitting out the van, and people’s reaction to it, has made Ben realise that there is a demand for this type of bespoke campervan, and he has ambitions to make more.

“I am in the process of putting together a business plan for Invest NI, “Ben says. “A few people have asked me about renting the van, or suggested I build one for them. I can’t afford to buy another van and convert it, but my business plan is nearly finished and I will be applying for grants in the hope I can build another van this summer to rent or sell and then see how it goes.

“There is definitely a market for something like this, especially with people taking more staycations. Maybe I will build five more!”