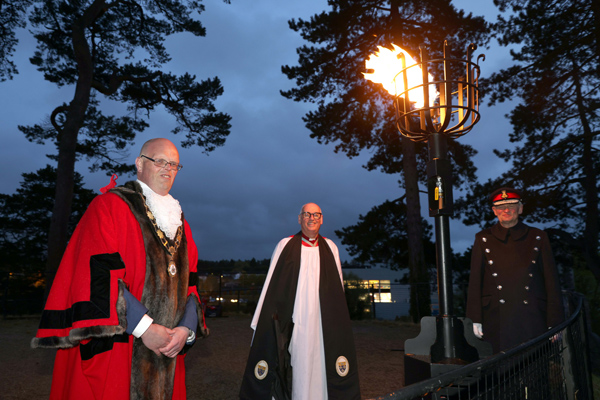 Councillor Jim Montgomery, Mayor of Antrim and Newtownabbey Borough Council; Archdeacon Stephen McBride, Mayor’s Chaplain, and Her Majesty’s Lord-Lieutenant of County Antrim, David McCorkell at the lighting of the beacons on May 3. Photo: Stephen Davison.

In his capacity as Mayor’s Chaplain in Antrim and Newtownabbey Borough Council, the Archdeacon of Connor, the Ven Dr Stephen McBride, took part in two beacon lighting ceremonies on Monday May 3 to mark the centenary of the opening of the Northern Ireland Parliament.

The Newtownabbey beacon was lit at Macedon Point in Hazelbank Park in Whitehouse and the Antrim beacon was situated at the top of the motte in Antrim Castle.  Her Majesty’s Lord-Lieutenant of County Antrim, David McCorkell, a parishioner of Broomhedge, read a citation quoting from the speech made by King George V at the opening of Parliament.

In a speech, the Mayor, Councillor Jim Montgomery, expressed his hopes for the future of Northern Ireland while acknowledging the difficulties of the past.

Archdeaon McBride concluded the proceedings using prayers from the Church of Ireland’s liturgical resources for the occasion.

The is the fourth term Archdeacon McBride has served as Mayor’s Chaplain, first of all with Paddy Marks, on two occasions with Paul Michael and currently with Jim Montgomery.

“My duties include taking the opening devotions at the monthly council meetings and attending formal civic functions,” Archdeacon McBride said. “I have been very fortunate to have been chaplain on four occasions when the Freedom of the Borough has been conferred. The first was RUC, then the RAF, the Royal British Legion and most recently Jonathan Rea MBE, five time Superbike World Champion.

“It has been a great honour to have been chaplain to three Mayors and to have served with them on such prestigious occasions.” 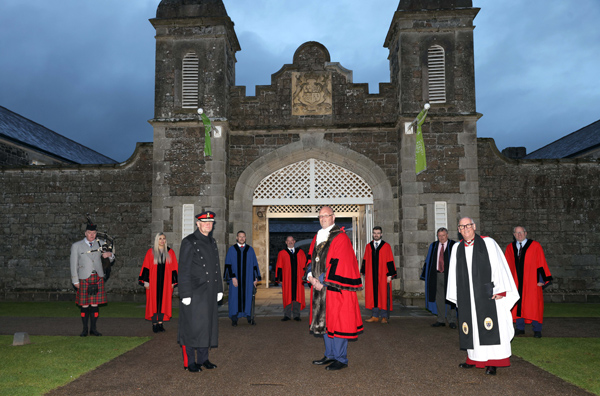 The lighting of the beacons in Antrim and Newtownabbey Borough to mark the centenary of the opening of the Northern Ireland Parliament. Photo: Stephen Davison.