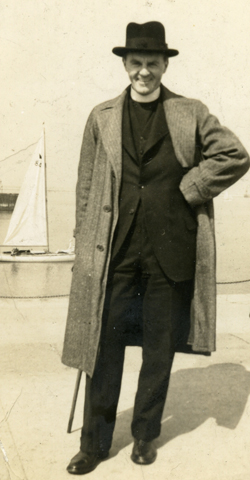 One hundred years ago this month, the Irish Border was created by the Government of Ireland Act which came into force on May 3 1921.

Collaborating with the Church of Ireland’s Historical Centenaries Working Group, the RCB Library is marking this anniversary with two back-to-back online Archive of the Month exhibitions in May and June 2021.

Dr d’Alton’s presentation in May on ‘The Birth of Partition’ focuses on the experience of southern Protestants, while Professor Walker’s piece (to be published in June) will analyse the ‘Foundation of Northern Ireland.’

Their deep analyses of this period again draw on the readily-available Church of Ireland Gazette digital archive.  Using editorials, articles and headlines in the newspaper, the exhibitions provide contrasting texts from both southern and northern perspectives of how the political division of Ireland impacted the Church of Ireland, then as now an all-island institution, with dioceses, parishes and other structures spanning the Border.

In his piece, Dr d’Alton uses the paper and a variety of other sources including the Journals of the General Synod to examine how partition emerged, and was seen through the prism and pages of the Gazette’s southern orientation at the time.

He comments: “Founded as the Irish Ecclesiastical Gazette in 1856, it had reported on the vicissitudes and turbulences that had rocked the Church since then – institutional, political and theological. In particular, disestablishment of the Church in 1871 had been traumatic and challenging but ultimately rejuvenating, and the Gazette’s own fortunes mirrored that. It expanded to become a weekly paper in the 1880s and became much more a conduit of information for the laity. Fifty years later, the Church was faced with another potential crisis as the island was split into two political jurisdictions.”

The paper’s editor at the time was the Rev George Ashton Chamberlain, rector of Clondalkin, in Dublin. As Dr d’Alton recounts, ‘he took a strongly anti-partition line, reflecting the paper’s southern-centric emphasis on violence in the south, and rumours of truces and outside interventions.’

Under Chamberlain’s editorship, ‘several consistent lines in the Gazette on the relationship between partition, the Church and the southern minority,’ excoriating partition as ‘…an irrevocable calamity’ and determined to emphasise: ‘We have always opposed the [Government of Ireland] Bill, on the ground that any measures which postulates the partition of Ireland is rotten at its core.’

The Gazette’s argument was that ‘…it places Southern Unionists in a hopeless position from the start … maintaining that the vital fact of the Irish problem’ was ‘that Ireland is a unit, politically and economically, and that any artificial attempt to divide it must in the long run lead to a disastrous failure.’

Despite these fears, and its own strong anti-partitionist line, the Gazette continued to view itself as a unifying force, or as Chamberlain framed it, ‘a sort of demilitarised zone’ and ‘a meeting place’ where despite the establishment of two legislatures, ‘Northern and Southern Churchmen may exchange views, strengthen sympathy and feel that they are one in the cause they have at heart.’