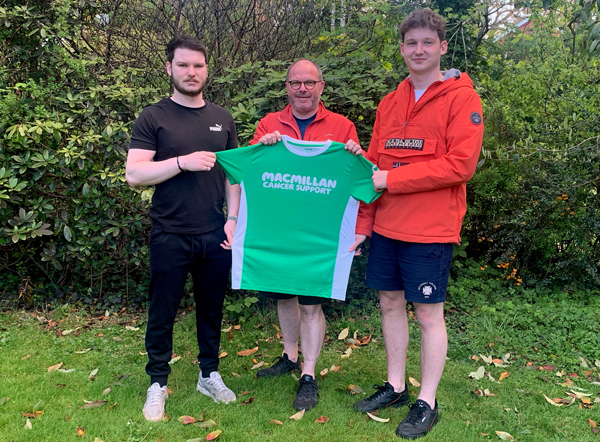 The Rev Canon Kevin Graham and his sons Jamie and Luke will take on the Macmillan Cancer Support ‘Mighty Hike’ along the north coast in June.

The Rev Canon Kevin Graham is in training for a marathon walk which will raise funds to support those living with cancer.

Kevin, rector of St Bartholomew’s, Stranmillis, and Connor Director of Ordinands, will be joined by his sons, Jamie, 23, and Luke, 18, on the Giant’s Causeway Mighty Hike along the north coast.

Cheering them on will be Kevin’s wife Cheryl, whose terminal cancer diagnosis last November has inspired the trio to take on this Macmillan Cancer Support challenge.

Kevin said: “I have run many marathons but those days are over, however the thought of walking one was quite appealing. I spoke with my sons Jamie and Luke to see if they would accompany me.

“They agreed, so on June 26, regulations permitting, we will take part in the marathon walk from Ballycastle to the University of Ulster at Coleraine along the Causeway Coast – 26.2 miles to be exact!”

Cheryl received treatment for breast cancer in 2010, when Kevin was rector of Movilla Parish, Newtownards, Diocese of Down. In 2020, she underwent gene testing, which revealed she had the BRCA2 gene which, Kevin explained, means Cheryl is at high risk of other cancers.

There were plans for surgery that would reduce the chances of any cancer spreading but, due to lockdown, these surgeries did not take place.

Last November, Cheryl was called for an MRI scan. A first biopsy indicated no cancer, but a biopsy of a second area of concern did not have the same outcome.

“We were told on November 19 that it was cancer,” Kevin said. “It came as a bit of a shock, we had the diagnosis and the prognosis in the space of a week.”

The prognosis, which the family received on November 26 last year, was that the cancer had metastasized and was terminal. Cheryl has undergone chemotherapy, and other treatments will follow.

“We are hoping that time will be added because of the treatment,” Kevin said. “We hope that the tumours will reduce in size and that will be a better starting point in terms of fighting the cancer. Other treatments will continue. This is palliative care, but not in the way people think, it is about management of the disease.

“Cheryl is very hopeful. The destination hasn’t changed, but hopefully the journey will be longer.”

Kevin said the family had been supported by Macmillan in 2010. “The pandemic has meant that support has not been so easily available this time. There is nothing we can do medically for Cheryl other than support her, but we can still help others who are facing cancer by raising funds for Macmillan.”

Since deciding to take on the marathon challenge in January, Kevin has completed more 1,400km in training, with his longest walk to date being 21km, which is a half marathon.

If you would like to sponsor Kevin, Jamie and Luke in this challenge for Macmillan Cancer Support, please visit their Just Giving page.