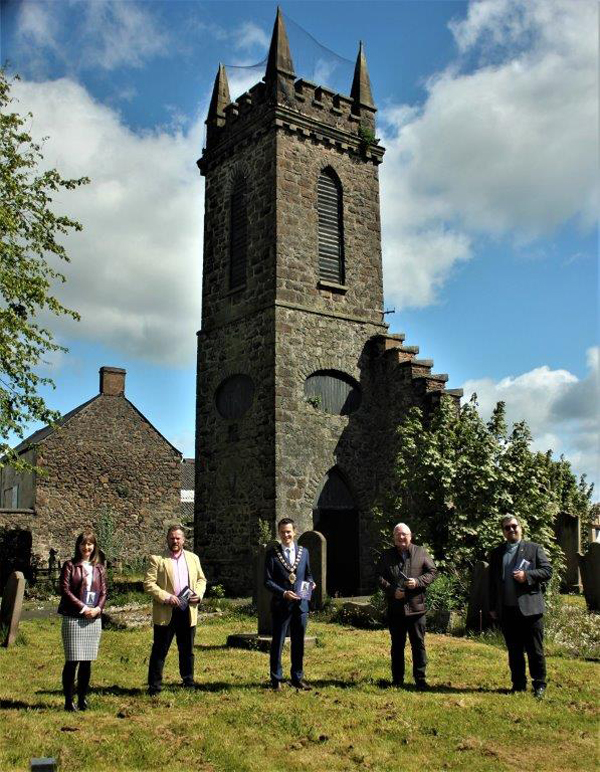 The Parish of Kilconriola and Ballyclug, Ballymena, marks its 300th anniversary this year and the Mayor of Mid and East Antrim Borough Council has officially launched a special commemorative booklet to mark the tercentenary.

Councillor Peter Johnston was joined for the launch by the rector, the Rev Canon Mark McConnell; curate, the Rev Emma Carson; and members of the congregation who produced the booklet with council’s support. 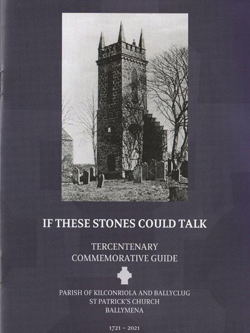 The Mayor said: “We are delighted to mark this significant milestone with St Patrick’s Church of Ireland in Ballymena. The present church and its predecessor church, now known as the Old Church Yard off Church Street in Ballymena centre, are woven into the fabric of the history of the town, being two of Ballymena’s well known Seven Towers.

“Given the difficulties of the last year, Council also recognises the valuable role that our local churches play in their congregation’s wellbeing but also wider community life.”

Mark said that the tercentenary brochure had been made possible by the support of Mid and East Antrim Borough Council, and the parish was very grateful.

“This brochure is an excellent resource and I hope many people will take the time to enjoy it and visit us at St Patrick’s after our planned renovation works are complete,” Mark said. 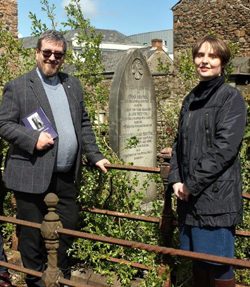 Pictured beside the gravestone of Emma Reeves, wife of former rector the Rev William Reeves (Emma’s was the first funeral out of the new church on October 12 1855) are The Rev Canon Mark McConnell; and Jayne Clarke, Museum and Heritage Manager, Mid and East Antrim Borough Council. Photo: Loraine Watt.

The attractively produced brochure provides a brief history of St Patrick’s Church and the wider parish, including referencing the Old Church Yard site where the predecessor St Patrick’s Parish Church served generations of families after being consecrated in 1721.

The present St Patrick’s Church on Castle Street welcomes people today. It was constructed after fundraising, generously supported by the local landowner Adair family in the 1850s.

The booklet also includes a visitor guide to enable visitors to appreciate the church building and fine interior.

A copy is available on request, free of charge, from the reception desk at The Braid, Ballymena. 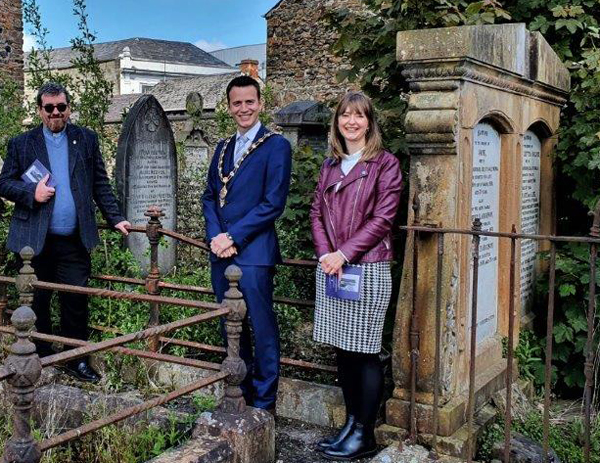 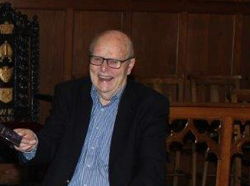 Harry Fisher, a former Parish Secretary, was delighted to receive the first copy of the commemorative brochure. Photo: Loraine Watt.

Parish history
The original parish church of Kilconriola in the townland of the same name was situated about two miles north of Ballymena. It was in ruins from before the Reformation. A parish church was started in 1707 and this was consecrated in 1721. This building, clearly visible from St Patrick’s, is in Church Street but only the tower remains surrounded by a graveyard. With the growth of the population this church proved too small and the plan was to replace it with a church seating 800. The foundation stone was laid on St Patrick’s Day 1853 and consecrated in 1855. The project was completed largely due to the enthusiasm and dedication of the then rector William Reeves. As well as raising much of the necessary money he also made a substantial gift himself. The Adair family of Ballymena Castle gave the ground for the present site and also contributed greatly to the overall cost of £5,000 with the parishioners also responding generously. Unfortunately the first funeral in this new church was to be that of Reeves’ own wife – she died giving birth to their 10th child. A window is dedicated to her in the north aisle. William Reeves was also renowned for antiquarian and archaeological research and for some years was also headmaster of the Diocesan School in Ballymena – the forerunner of the present Ballymena Academy. A plaque can be seen on the outside wall of the tower commemorating his work. The church was totally destroyed by a fire in December 1879 but the same contractor rebuilt it along the old lines in 15 months at a cost of £9,000. The same bishop who had consecrated the original building re opened it. The building has remained much the same since that time though there have been extensive renovations to maintain the quality of the structure. There have been additions in the form of a robing room, church bells, stained glass windows and other items of furniture.