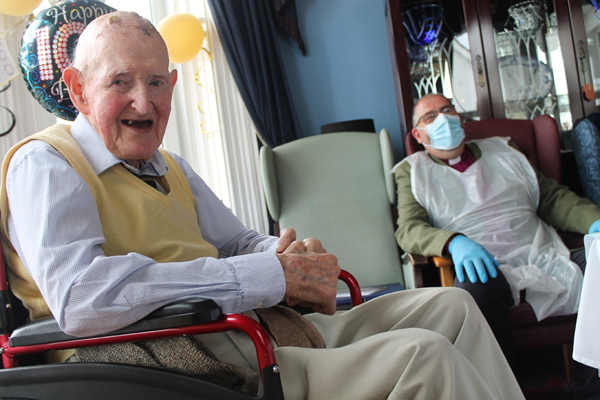 Clem Shaw enjoying his 100th birthday party on June 2. Bishop George was among the guests.

Many congratulations to Clem Shaw, a parishioner of St Thomas’ Parish Church, Belfast, who celebrated his 100th birthday on Wednesday June 2.

With the easing of restrictions, the Bishop of Connor, the Rt Rev George Davison, was an honoured guest at a birthday party for Clem in Richmond Nursing Home, Cultra, where he has been living for a number of weeks. Please see photo gallery below.

Staff joined Clem’s family for the celebrations, which included balloons, birthday cake, tea and cupcakes, and Clem responded to all the good wishes by sharing some key moments from his life.

He spoke lovingly of his late wife Betty, a well-known singer in the Belfast Philharmonic Society, who brought him into St Thomas’ where she sang in the choir. “We never had a row – if we had a problem, we debated it and came to a logical conclusion, we were so lucky,” Clem said.

He shared fond memories of his schooldays, proudly showing off the Old Instonians’ tie he was wearing, and talked about his love of wildlife and his long involvement in tennis, remarking that, as President of Irish Tennis, he had his own seat at Wimbledon.

Clem married Betty when he was 49, some years after he first met her in the Post Office when he was ‘doing tennis club business.’

Born in Holywood on June 2 1921, Clem’s father Ed was a commercial traveller and his mother was Mary, née Clemence. Mary named her son with her maiden surname.

Clem was educated to senior level at Royal Belfast Academical Institution before completing his formal qualifications at Business College. He has proudly maintained his membership of the Old Instonian Association and he is also an honorary Lifetime Member of Malone Golf Club.

Clem joined Belfast City Council shortly after the beginning of World War 2, and one of his early duties was to assist the residents of north Belfast to urgently find new accommodation after they lost their homes in the Blitz of 1941.

He also served as support for uniformed forces and the Air Raid Patrols, and can recite numerous anecdotes about unexploded bombs and incendiaries.

Clem later joined the RAF Reserve and spent some time ensuring adequate supplies were distributed to various squadrons and airfields in the midlands of England. At this same time, his elder brother Edmond was a bomber aeroplane pilot and Clem had the misfortune to witness his untimely death in an air crash as a group of planes took off together.

Returning to Belfast City Council after the war, Clem was appointed to the Lord Mayor’s Office and was responsible for ensuring the preparation and presentation of the minutes of the regular Council meetings.

He is also very proud to have met Princess Elizabeth the Duchess of Edinburgh and Prince Philip the Duke of Edinburgh on the occasion of their visit to Belfast in 1949, before the young Princess ascended to the throne.

One of the many voluntary and community interests which Clem enjoyed was his role as Secretary Manager of Belmont Tennis Club, a post which he held for more than 25 years during the late 50s throughout the 60s and into the early 70s.

His professional management and administrative expertise resolutely supported the club during these rapidly changing post-war times as he established enviable tennis playing achievements and popular weekly dances and gatherings from which many lifelong romances and relationships still remain and are fondly remembered.

Clem and Betty had no family, but they enjoyed an extremely happy marriage and travelled widely together throughout Ireland and Scotland.

Deeply interested in natural history all his life, Clem acquired an expert knowledge of flora and fauna which he developed into an impressive interest in moths and butterflies.  He was a highly respected member of the British Butterfly Association and was their UK National Secretary for many years until he retired around 2016. He was also a member of Irish Peatland Conservation Council.

Since living at Malone, Clem and Betty have been closely associated with St Thomas’ Parish Church and even after his wife’s passing Clem continues to support the parish. He enjoyed a visit from his rector, the Rev Paul Jack, just before his birthday.

Thanks to Clem’s nephew Trevor Hinds and his wife Judy for sharing some further details of Clem’s interesting life.