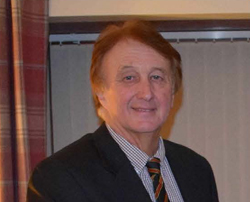 Denis wants to do something positive to give thanks for reaching the 70 milestone, and two organisations which have meant a great deal to him over the years are Macmillan Cancer Support and the South American Mission Society Ireland (SAMS).

His wife Hilary died from cancer 23 years ago at the age of 40, and more recently his younger brother Alan and his close friend Archdeacon Philip Patterson also passed away due to cancer and he wants to remember them at this time.

Denis’s involvement with SAMS and mission in South America goes back more than 40 years, and a project to build a toilet block and kitchen facilities for the indigenous community in Paraguay has been identified.

Denis has also been involved in sport most of his life and captained both Lisnagarvey Hockey Club and Lurgan Cricket Club. And so he has decided his walk on June 19 will follow a route from Lisnagarvey’s ground in Hillsborough to Lurgan’s ground at Pollock Park – a total of 14 miles (7+7 @70).

To sponsor Denis and raise funds for both  Macmillan and SAMS  please CLICK HERE.