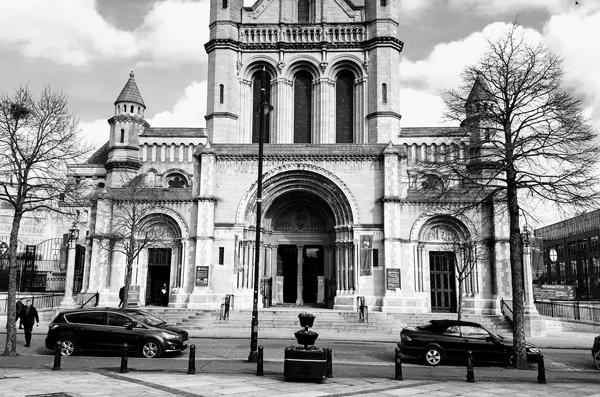 The Dean of Belfast, the Very Rev Stephen Forde, and Fr Martin Magill of St John’s Parish on the Falls Road, are joining with Corrymeela to host Courage to Lament at St Anne’s Cathedral on Monday June 21.

June 21 is annually designated the Day of Reflection, and this event in the Cathedral will provide an opportunity to acknowledge and lament the ongoing hurt and division caused by the conflict in Northern Ireland.

Following the response to Fr Magill’s address at the funeral of murder victim Lyra McKee held in the Cathedral on April 24 2019, a group of Catholic and Protestant clergy came together to build a unified Christian response to sectarian and paramilitary violence.

Courage to Lament follows on from the 50 day long #couragepentecost initiative, and will feature film, music, prayer, and liturgy.

Between 11am and 2pm, the Cathedral will host a number of interactive exhibition spaces. A formal, ecumenical service of lament will take place at noon. Participants will be seated and socially distanced within the Cathedral nave.

Dean Forde said: “I am delighted that St Anne’s Cathedral, at the heart of the City of Belfast, will open its doors on 21st June for Courage to Lament.

“The Cathedral has been a place of gathering and lament during the darkest days of The Troubles, as it was for the funeral of Lyra McKee in 2019. But out of lament and grief comes the resolve for new beginnings and a better future. This day can provide such an opportunity for our community.”

Corrymeela Community leader, the Rev Dr Alex Wimberly, said Courage to Lament provided a space for all to consider the devastating consequences of sectarian and paramilitary violence.

“As people of faith, we believe that reconciliation requires lament: Lament for past and present violence, and lament for ongoing griefs.,” Dr Wimberly said.  “We believe that the act of lament is in itself an act of courage, and we are delighted to host this event as a part of the ongoing #couragepentecost project.”