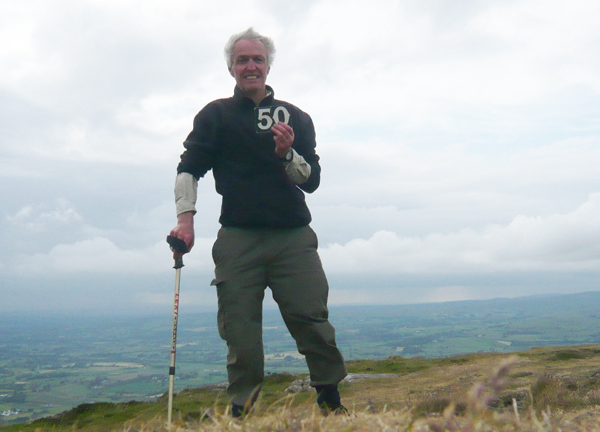 Flashback to June 2008 when Canon Stuart Lloyd climbed Slemish 50 times in three days to raise funds for a church in Kathmandu, Nepal.

A former rector of Ballymena, the Rev Canon Stuart Lloyd, is preparing to climb the height of Everest in support of mission agencies in Nepal.

Stuart won’t be heading to the Himalayas. Instead, sticking closer to home, he will climb Slemish Mountain near Broughshane 50 times over the course of a week, scaling a total of 30,000 feet – a little over the height of the world’s tallest mountain.

Stuart has accomplished this feat twice before. In June 2008, he climbed (and descended) the 30,000 feet over a three-day period, raising funds for a church in Kathmandu which he and his wife Jane have supported for many years.

This time, he is going to take a week to reach his goal, starting on June 19 and finishing on June 26, climbing Slemish seven times each day, with an extra ascent on the last day. 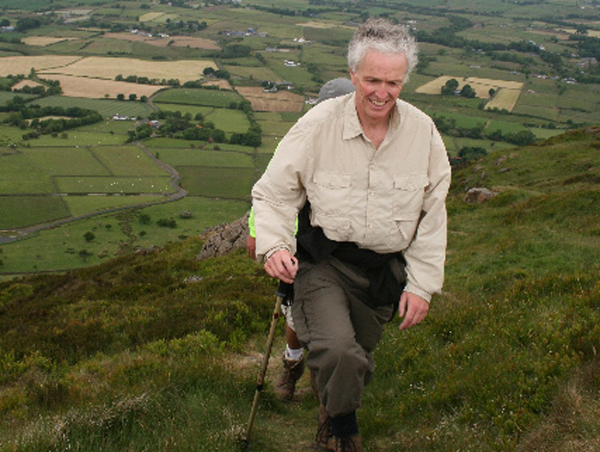 June 2008 – Canon Stuart Lloyd ascending Slemish as part of his fundraising ‘Everest’ hike. He is inviting people to join him when he undertakes this challenge again in 2021.

The ‘Everest via Slemish’ project is being undertaken to raise awareness and support for mission bodies in Nepal, where Stuart’s niece and her husband have been serving for more than 25 years.

“We are hoping to support two mission/charitable bodies,” Stuart explained. “The first is Church Mission Society Ireland (CMSI) and their involvement in Nepal and the second is a Nepali NGO called Koshish.”

CMSI supports three areas of mission in Nepal. One is outreach by the church in Kathmandu which offers a ‘friend’s service’ to those who are referred to the city for health care from rural areas, providing hospitality and support for as long as these patients are required to stay in the city.

The Christian NGO, the Human Development Community Service, oversees an international school especially for mission children, runs a school for children with mental and physical disabilities and, through radio stations, provides wellbeing information.

The third area of mission is nutrition promotion, and this is the work Stuart’s niece Deirdre Zimmerman, a CMS associate partner, is engaged in. Many Nepalis have poor diets and this impacts especially on women of child bearing age. Deirdre and her team provide training for locals which allows them to facilitate nutrition workshops.

Koshish is the second charity Stuart’s Everest climb will support. Nepal is far behind Ireland in providing mental health care and Koshish is spearheading that work through advocacy with the Government and the training of local leaders. Many suffering from mental health issues are locked away or thrown out of homes because of lack of understanding. Among other things, Koshish seeks to rescue these people and runs a refuge home for them.

Stuart said: “All of the various bodies that are being supported are immediately engaged as part of their work with the challenges of Covid. Like India, Nepal has been hit by a second wave, and for a time hospitals were overwhelmed and real hardships were being faced by so many.

“Nepal is very dependent on India and had hoped to get its vaccines from that source. This has been cut off and now they are struggling to find other sources.”

He continued: “The needs of those whom CMSI and Koshish has been catering for have thus increased greatly and any support from others will be greatly appreciated.”

Some volunteers have committed to joining Stuart on all 50 ascents, but he would be delighted if anyone would like to join him at any stage over the course of the week, and would also welcome donations which can be made through the three churches or through Just Giving – St Patrick’s Church Broughshane. Donations can also be sent directly to Canon Stuart Lloyd at 123 Knockan Road, Broughshane, BT43 7JA.