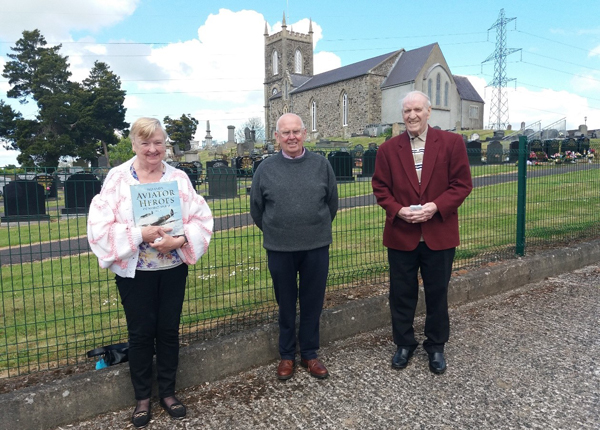 May Best, John Hewitt and Gerald Best at the presentation of May’s Uncle David’s war medals and RAF log books to the Ulster Aviation Society on May 26.

A Magheragall parishioner has donated treasured wartime memorabilia which belonged to her late uncle to the Ulster Aviation Society.

A number of years ago, May Best shared the story of Flight Sergeant David Maffett in the Magheragall Parish magazine. She said at the time that she would like to find a permanent home for David’s World War Two medals and his flying log books – somewhere they could be on display to enable the retelling of David’s story.

Mr Hewitt has written extensively on the subject and his first book was entitled Ireland’s Aviator Heroes of World War II. It recounts stories of individual personnel using interview material from surviving personnel and their families. The interviews are supported by extensive research of the original flying log books and service records of the men.

Nicholas said: “Mr Hewitt’s work is a witness to the great courage and sacrifice demonstrated by these Irishmen as they contributed to the Allied war effort against Nazi Germany and Imperial Japan.”

Mr Hewitt told May that her uncle’s story will be included in his fifth volume of Ireland’s Aviator Heroes of World War II. He said Flight Sargent Maffett’s medals and documents would become an important part of the collection at the Maze and would be on display.

Mr Hewitt also presented May and the rector a signed copy of his second volume of Irish Aviators of World War II. 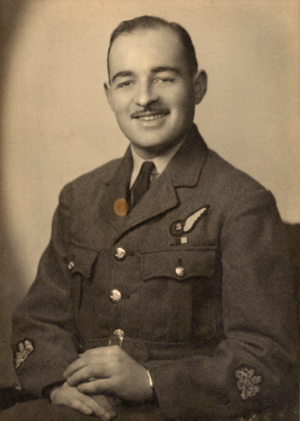 During the meeting on May 26, David Maffett’s story was recalled. He grew up in County Down and attended Down High School, finishing in 1939 when, aged 18, he joined the Royal Air Force.

With the outbreak of war, David’s training led to his first tour of duty from January to September 1940 with 9 Squadron, Nos 3 Group RAF Bomber Command. During this tour, David completed 30 operations over Germany as a gunner on Wellingtons.

In September 1940, David was posted to No 20 Operational Training Unit at RAF Lossiemouth. The unit was formed in May 1940 to train night bomber crews using the Wellington.

Whilst at RAF Lossiemouth in January 1942, David received a letter from Thomas Stevenson, Acting Headmaster, and Robert Maxwell, Honorary Secretary of Down High School.

It stated: “In expressing to you the sense of admiration with which the school and all those associated with it regard your action in responding to the call of duty in the hour of national peril, sacrificing for a time at least your own prospects in the future, we feel that we have every reason to be proud of your action, and we assure you that your example in this respect has set high the good name of the school.

“It is our expectation that you will do credit to yourself in your new sphere of activity and that whatever the times ahead may bring, or whatever trials or hardships you may be called upon to endure, you will manifest in all circumstances those qualities of spirit, loyalty and devotion that have characterised the people of our nation through the years of the past. May we, in conclusion, in offering you our very best wishes, express the earnest hope that you will have a safe return when at length your presently appointed task is fulfilled.”

In April 1942, soon after receiving these words of encouragement from home, David was posted to RAF Marham for training on four engine Stirling Bombers in preparation for a return to operational duty.

He went on the first 1,000 bomber raid on Cologne. Several sorties later, on August 7 1942, he was shot down. The following is a description of that night:

“Three of the crew had managed to bail; the pilot, Sgt William Laidlaw, Wireless Operator Sgt David Maffett and Sergeant John Green the Observer, to become Prisoners of War.

“The rest of the crew – WO II AL Bachelder, RCAF, and Sgts HP Gardiner, GC Cavanagh, and LWA Barnard (Air Gunner), RAF – were killed in the crash. They were initially buried in a temporary military cemetery at Venlo. On 1st October 1947, they were re-interred in the Jonkerbos War Cemetery on the outskirts of Nijmegen in the Netherlands which contains 1,629 Commonwealth WW2 burials.”

In 2005, on the 60th anniversary year of the ending of the war, David spoke about his experiences, describing the events of August 7 1942. Reflecting on the death of four crew members and his own experience as a PoW, he wrote:

“I was lucky to be alive. I was wireless operator that night. Only three got out, the pilot, navigator and me. They got out first and I was alone in the aircraft, until I bailed out.

“I was a PoW for three years in Silesia, which is now in Poland and quite near Auschwitz. The camp held 13,000, some from Dunkirk, some 51st Highlanders and the RAF prisoners. On January 22nd 1945, 3,000 of us were marched out.

“We had to march 20km a day and had just two breaks. We went to Duderstadt and stayed 10 days, then across the Elbe at Magdeburg. By the time we reached Lukenwalde, just 50 miles from Berlin, there were just 145 of us still alive.

“We arrived in Berlin on the Wednesday and the Russians took over on the Saturday and held us for five weeks. Then they took us to the Yanks. We were flown to Brussels. I got back in June 1945 and was sent to RAF Cosford and then home. I was just 24 by then.”

As David’s nearest relative, May has remembered and treasured his wartime stories along with his medals and his RAF flying log books.

Nicholas said: “May’s decision to donate them to the Ulster Aviation Society at the Maze will ensure that her Uncle David’s story of bravery will be remembered and treasured by future generations.”