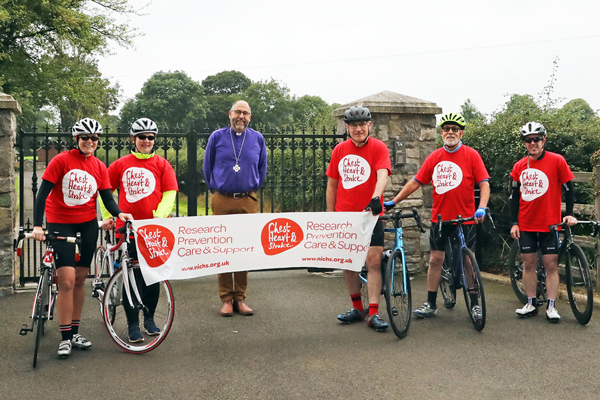 The Bishop of Connor, the Rt Rev George Davison, stepped out to wish the cyclists all the best as they passed See House in the early stages of the 83 mile loop.

David Holmes, Parish Reader in St Bride’s Parish Church, Kilbride, has raised more than £2,500 for NI Chest, Heart and Stroke through a sponsored cycle around the churches in Antrim rural deanery.

The cycle, with the very French title of L’Etape du Deanery, took place on Saturday September 4, starting and finishing at St Bride’s near Doagh and following a route which took the cyclists to all 14 churches in the rural deanery.

The Bishop of Connor, the Rt Rev George Davison, took time out of a rare day’s holiday to meet the riders at the gates of the See House, a short distance into the cycle, and wished them well on their journey.

They were greeted by clergy and parishioners at a number of churches and were very grateful for water and snacks as well as the moral support. St Jude’s even laid on a troupe of young dancers to cheer them on! 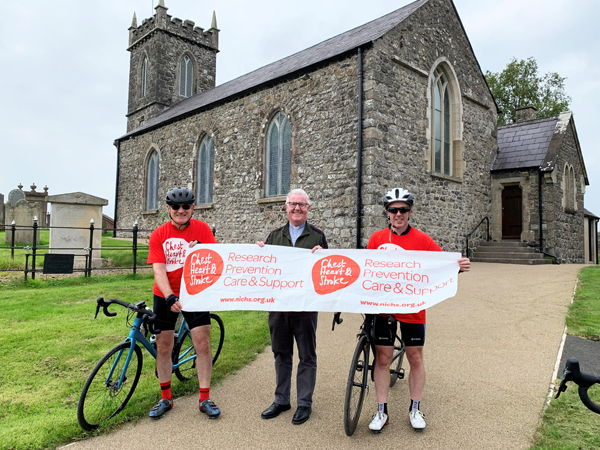 David said: “It was quite a dull day to begin with, and the sun made only an occasional appearance along the way, but overall conditions were good for cycling – with the exception of a strong headwind over the hills from Kells to Ballynure which made progress a little slower.

“By the time we reached St Bride’s again we had covered an overall distance of 83 miles but were all still in high spirits having accomplished a very worthwhile fundraising event.”

David is a keen cyclist and a former rugby player. He had hoped to organise something like this last year, but had to defer due to the pandemic. “With so many people taking to bikes since Covid-19 started, it is growing in popularity as a sport,” he said.

David expresses his thanks to everyone who has contributed to the charity by supporting ‘L’Etape du Deanery.’

Donations can still be made ONLINE. Everything donated goes to the charity with no commission paid to a third party.

The churches visited en route are listed below. Photos taken at each location can be seen on the Kilbride Parish website. 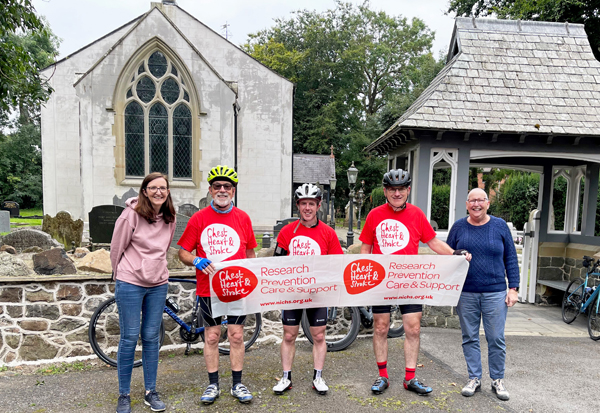 Stopping at St Catherine’s, Killead, with Margot McClure and her daughter Rachael.