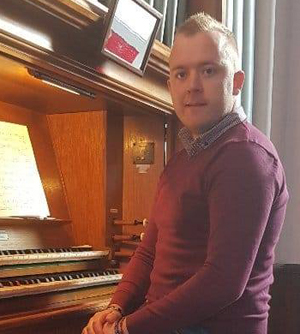 Dr Mark McKinty, organist at St Cedma’s, Larne, will give a recital on September 17 to celebrate the 140th anniversary of the church organ.

St Cedma’s Parish Church in Larne is set to celebrate a very significant musical milestone – the 140th anniversary of its beautiful pipe organ!

The parish will host a musical recital by the church’s present organist, Dr Mark McKinty, on Friday September 17 – almost 140 years to the day that the instrument was first used for public worship in St Cedma’s

The church itself stands on a site where Christian worship has been observed for a millennium. This organ, built by the Conacher firm in Huddersfield, was obtained in the late 19th century and was the first pipe organ installed in Larne. It remains one of the oldest still in regular use in the wider area.

The beautifully decorated instrument was first used in public worship on September 18 1881, and remains largely as it was when first installed, except for a slight enlargement in 1913.

Mark explained that the organ is entirely mechanical when played, except for the provision of air through an electric blower – such provision having previously been provided both by hand pumping and water power from the nearby river.

The recital will take place on September 17 at 7.30pm in St Cedma’s, Church Road, Larne, and there will be a retiring collection towards ongoing maintenance and refurbishment of the historic instrument.