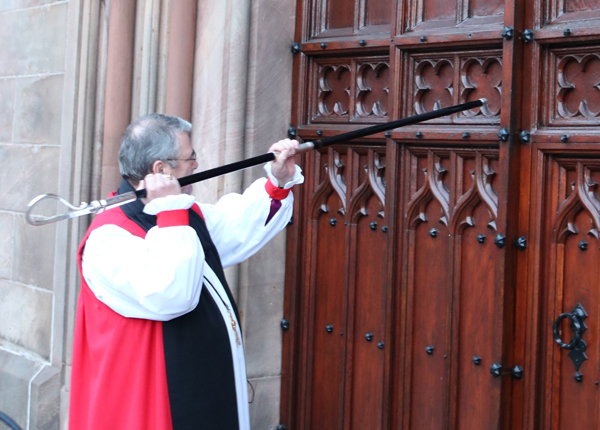 Archbishop John McDowell knocks on the door of St Patrick’s Cathedral, Armagh, with his crozier before the Service of Enthronement.

The Most Rev John McDowell was enthroned as Archbishop of Armagh and Primate of All Ireland on Tuesday September 14 at St Patrick’s Cathedral, on the Hill of Armagh.

Archbishop McDowell was elected to the office by the House of Bishops on March 11 last year, having previously served as Bishop of Clogher since 2011.  He took up his position on April 28 2020.

Due to the coronavirus pandemic, the Service of Enthronement for the new Archbishop unfortunately did not take place in 2020 and with the necessary restrictions earlier this year, plans for the service were put on hold. 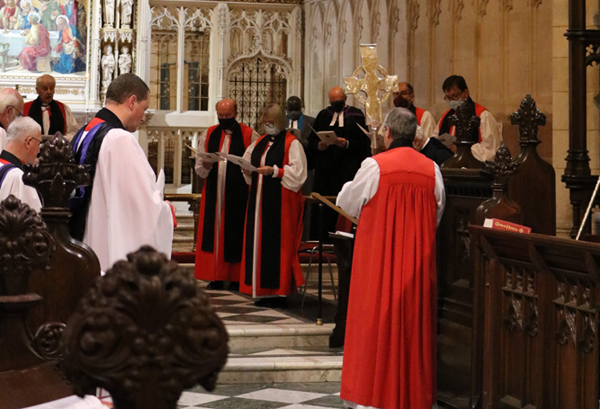 In his sermon, Archbishop McDowell reflected on the Cross of Jesus and the true meaning of sacrifice. He said: “Any human relationship or political or social arrangement which does not allow the sacrifice of reciprocal self-giving room to flourish will ultimately crumble, because it is founded on falsehood. On a reef of sand. And that is so because sacrifice is at the heart of the nature of God, who made us in his image.”

The Archbishop was welcomed to the Cathedral by the Very Rev Shane Forster, Dean of Armagh. The Bible readings during the service were Numbers 21:4-9 by the Ven Elizabeth Cairns, Archdeacon of Ardboe, and John 3:13-17 by the Rev Dr Heather Morris, General Secretary of the Methodist Church in Ireland.  Music was provided by the Choir of the Cathedral and the Rev Dr Peter Thompson, Assistant Organist.

The service was livestreamed at www.armagh.anglican.org and it is hoped that a much larger event, a liturgical welcome, for the Archbishop will be possible on a future date. 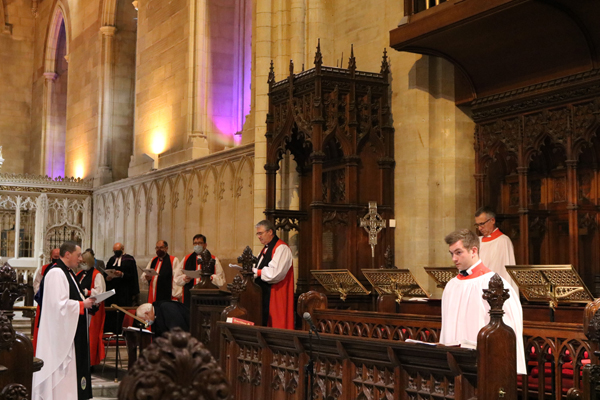 The full text of Archbishop McDowell’s sermon from the service is provided below:

May all the words that I say to you be spoken in the name of the Cross of Christ, our shame and our glory. Amen.

A Service of Enthronement usually marks the beginning of a Bishop’s ministry in his new Diocese, and in the case of the diocese of Armagh, as the Primate of All Ireland, in the Anglican obedience. That is manifestly not the case today, as I have been loitering in these precincts, persecuting clergy and parishes in this diocese, and trying my best not to wreck the RCB and the Standing Committee for nearly eighteen months now.

So, instead I thought I would say a word or two about (what is nowadays called) “the day that’s in it”. Holy Cross Day. The Cross. Not only the enduring sign of Christianity, but also its enduring substance. And I do so in the knowledge that the Cross may not be a benign or reassuring symbol to everyone, and also in the presence of an abbot whose house is under the patronage of the Holy Cross.

Holy Cross Day is not a red letter day in the Kalendar of the Church of Ireland. It commemorates the dedication in 335, of the Church of the Holy Sepulchre in Jerusalem, which was built over the supposed site of the crucifixion and the tomb of Jesus.

I don’t know about you, but It feels a bit odd to me to commemorate the Cross on its own, out of the context of Holy Week, and that full narrative of salvation history. In Holy Week our focus is on the tragedy of the Cross and the heartrending events of his last hours, when Our Lord was “extra-judicially executed on the majority recommendation of a corrupt committee of very religious people”. The emphasis of Holy Cross Day is a little different.

In early Christian art Jesus reigns from the Cross; only from the medieval period has he been shown suffering on it. And a fixation with that suffering can become morbid, as I think it comes very close to doing in many modern films and treatments of the life and death of Jesus. It cannot be without significance that those who witnessed the Cross of Jesus, and who have left us a witness of it in the New Testament, are very reticent about the gruesome details.

And there is no evidence in the Gospels to support Nietzsche’s notion that Christianity finds value in suffering in itself. As far as I can tell Jesus never once advised the diseased and troubled who flocked round him to reconcile themselves to their suffering. In fact he regards their sufferings as the work of Satan, and he releases them from it and heals them.

So, let us remember that it is the Cross of Jesus that we venerate today, not some generalised symbol. His life is consummated, not contradicted in the nature of his death.

The Cross of Jesus is unique in this sense. It is the only time in history when a sacrifice was also an atonement. When the sacrifice of the life offered was congruent with the reward it received. It is no longer the purity of doves and calves being offered (who are innocent only in the sense that moral concepts have no bearing on them). It is the offering of the blameless just on whose head a poisonous political aggression is now visited.

As for us, we plan our little heroisms and the Father is pleased to see them hung on the Cross of his Son, who he bowed to the ground, and to reward us far beyond the depth of our sacrifices.

So, following the imagery of the reading from Numbers and Jesus’ interpretation of it in the Gospel passage, the Cross of Jesus is something we turn to for life. Sacrifice in the Christian sense of mutual self-giving, concerns the flourishing of the self not its extinction. It involves a formidable release of energy and a turbulent journey from death to life.

In the foundational and continuing sacrament of baptism we are signed with the sign of the Cross; the sign of sacrifice. It is the sign with which we go out headfirst into the world. And we do so because the inner structure of love and of all fruitful relationships is sacrificial. We give ourselves to the beloved (whoever that may be) in order to possess ourselves more deeply.

Like baptism, sacrifice as mutual self-giving is not a single event; it is a passage that is never completed, that must always be resumed and prolonged. For once the word liminal is the correct one here. Sacrifice is the threshold situation that pervades all of life, that becomes the experience of our entire existence. No doubt that is what St Paul means when he talks about us dying every minute and what Jesus means when he refers to his death as his baptism.

All that we do, all of our human acts, have the quality of deathliness about them, as for good or ill they cannot be undone. And when I say “all our acts” I mean not only our religious or personal acts, but also our social, economic and political acts. Christ rules over the whole of life from the Cross. So, are our acts, acts of deathliness leading to life or are they more like the acts of the unequalled ego, deepening into the gloom of annihilation?

Sacrifice is not as it has been so often caricatured – some form of self-mutilation. In a relationship it is not the submission of a woman to a capricious tyrant of a husband or of a poor person to an unjust social system. Any human relationship or political or social arrangement which does not allow the sacrifice of reciprocal self-giving room to flourish will ultimately crumble, because it is founded on falsehood. On a reef of sand.

And that is so because sacrifice is at the heart of the nature of God, who made us in his image. Sometimes we express this politely (even decorously) such as in the Athanasian Creed, when we say of the Persons of the Trinity, that “none is afore or after other”. Sometimes with St Paul much, much more radically, as in Philippians when he points to a sacrifice at the heart of God, (taken before the worlds were made,) not to consider equality with God as something to be taken advantage of, but taking the form of a servant…”

And as St John points out in the Gospel reading, the servant not only came, but “…must be lifted up”. Must. Because God is what he is, the lifting up of His Son is inevitable, and glorious. The source of life.

The Cross interprets ourselves and the world to us. In a personal sense Jesus calls us to bear it with him, but to bear it as sons and daughters of the resurrection; in the mutuality of sacrifice. In the Church it is always present in the continuing sacrament of our initiation and is a standing rebuke throughout our lives to what are often the egotisms of our discipleship. In the political and social senses the faith of the Cross brings a disruptive energy to the spurious stability of any civilisation which claims to be just, but is merely complacent, yet also recognises the signs of the life of the Spirit and the Cross of Jesus wherever they are encountered.

Clung to by millions of dying men and women; the hope of millions more who live in violence and oppression; the Cross is the sign and agent of all human emancipation.

So, in finishing, if I could add a word or two to the Collect of the Day:

Almighty God, who in the passion of your Son made an instrument of death to be for us the means of life and peace: grant us so to glory in the Cross of Christ that we may gladly suffer for his sake; yet seek never to be a cause of suffering in others, also for his sake, who is alive and reigns with you, in the unity of the Holy Spirit, one God, now and for ever. Amen