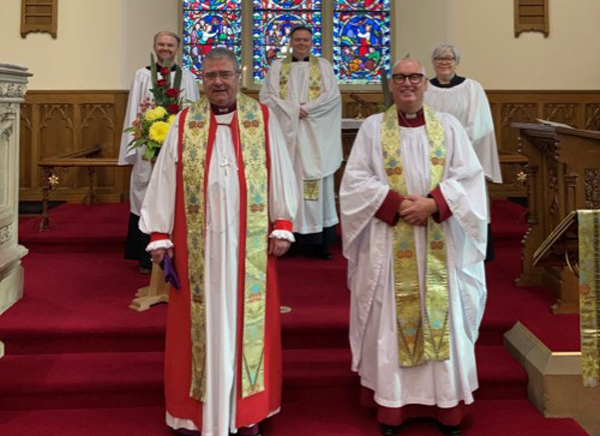 Archbishop John McDowell, Archdeacon Stephen McBride and clergy at the service to celebrate the 425th anniversary of the dedication of All Saints’ Parish Church, Antrim. 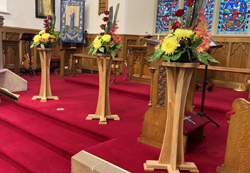 Three flower pedestals were dedicated at the anniversary service.

On November 7, the Archbishop of Armagh, the Most Rev John McDowell, returned All Saints’ Parish Church in Antrim where he was curate-assistant from 1996 until 1999.

Archbishop McDowell was the guest preacher at a service marking the 425th anniversary of the dedication of All Saints’. The Archbishop also dedicated the parish’s state-of-the-art audio visual system, three flower pedestals, and a stained glass window.

The window was designed by CWS Design in Lisburn, and depicts Christ’s teaching in Matthew 6:26 – ‘Look at the birds of the air.’

Over the period of lockdown caused by Covid-19 restrictions, Antrim’s current curate-assistant, the Rev Peter Blake, set up a recording system, allowing more than 20 parishioners to receive a digital device with Sunday’s service downloaded on to it each week.

This is delivered on Mondays and collected on Fridays and the vicar of Antrim, the Ven Dr Stephen McBride, said it had been a lifeline to those who were shielding and unable to follow the online services due to not having a broadband connection.

At the evening service on November 7, the Bishop of Connor, the Rt Rev George Davison, confirmed 15 young adults and three adults in a joyful celebration service. Unfortunately three of the young adults were not able to attend as they had tested positive for Covid-19 during the week, and it is hoped another date for their Confirmation can be arranged in the near future.

This was one of the largest Confirmation groups in recent years and the clergy are arranging on a monthly contemporary service to encourage the young members and their families to build on the promises made in the Confirmation service. 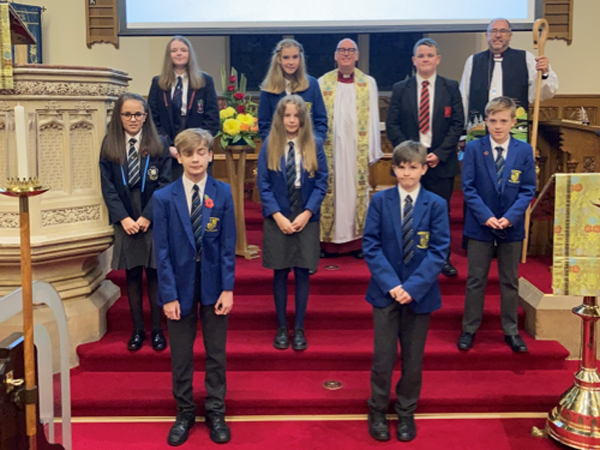 Some of the young people confirmed in Antrim on November 7. 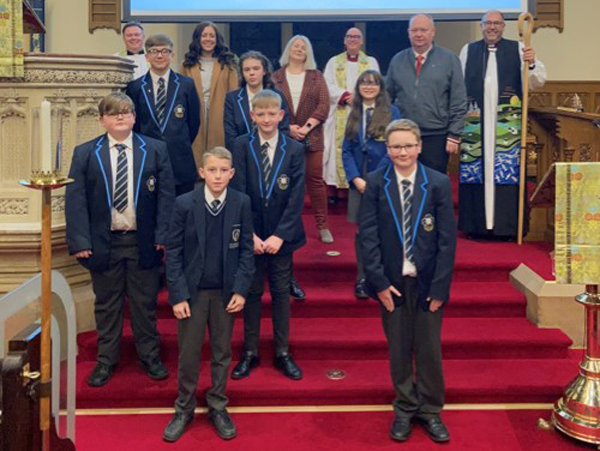 Confirmation in All Saints’, Antrim, on November 7.

Archdeacon McBride, who has been vicar of Antrim Parish since 1995, commented on the great team effort of parishioners who had worked exceptionally hard over many years to have the church in such a great state of repair.

Dr Paul Larmour, one of Northern Ireland’s leading architectural historians, has described All Saints’ Church  as the finest example of Elizabethan Gothic architecture in Ireland.

Archdeacon McBride commented on the joy of worshipping in such a beautiful building, but also on the privilege of being vicar to such a supportive and encouraging group of parishioners.