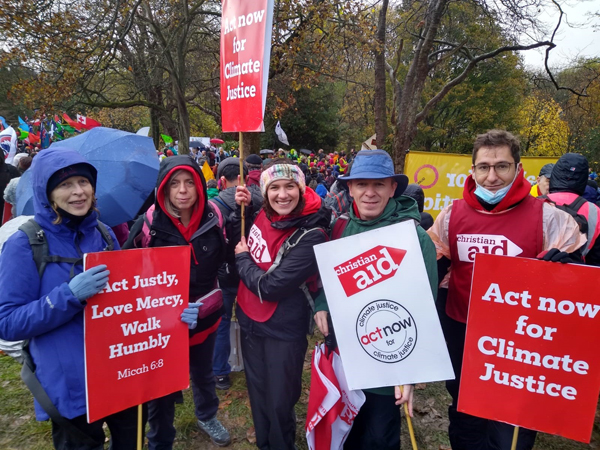 Dr Jeni McAughey, a retired GP and member of St Patrick’s, Parish, Whitehead, joined tens of thousands of demonstrators on the streets of Glasgow on November 6 for a day of action coinciding with the UN climate summit, COP26. Millions more demonstrated in cities around the globe, including Belfast and Dublin.

Jeni has been an environmental activist for many years. She is a member of the Third Order, Society of St Francis, an Anglican lay order committed to living simply and caring for creation. She is also a board member of Jubilee Farm near Larne – Northern Ireland’s first community farm which aspires to producing food in harmony with nature.

She was part of a five-strong delegation of Christian Aid activists who travelled from Belfast to Glasgow by coach and ferry. The others were the Rev Cheryl Meban, a Presbyterian minister from Lisburn; Stephen Trew, a civil servant and climate activist from Lurgan; Darren Vermaak, who works for a clinical research company and lives in Dublin; and Helen Newell, Christian Aid Ireland staff member.

Their luggage included thousands of origami paper boats which were added to a Christian Aid ‘flotilla’ of ‘little boats’ being displayed in a Glasgow Cathedral to coincide with the crucial summit. The boats were made by Christian Aid supporters, including parishioners in Whitehead and Islandmagee, who wrote their hopes and prayers for the world’s efforts to avert runaway climate change in each boat.

Christian Aid said the paper boats symbolised that although everyone is in the same storm, the people of the world are not in the same boat when it comes to dealing with the impact of climate change.

“Richer, polluting countries like the UK and Ireland are well-placed to cope with its effects, while people in developing countries, where emissions are low, are already experiencing intense heatwaves, prolonged drought, dangerous cyclones, calamitous flooding and devastating locust swarms,” the charity said.

“In the countries where Christian Aid works, climate change is a powerful driver of poverty which has for many years been destroying crops, homes and livelihoods.” 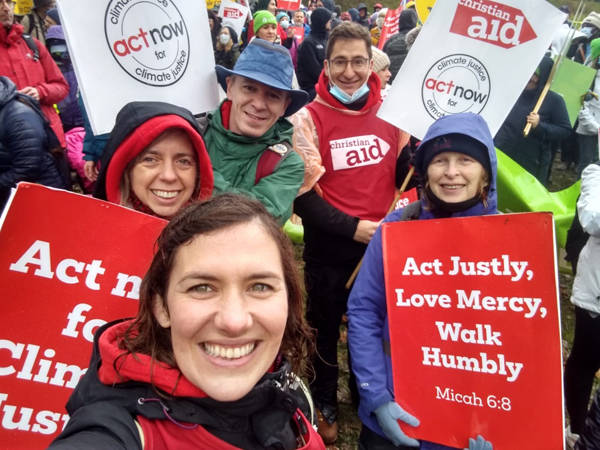 The Christian Aid Ireland activists in Glasgow for COP26. 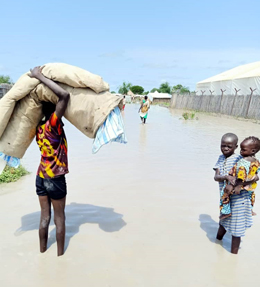 Christian Aid Ireland Chief Executive Rosamond Bennett thanked Jeni and the others for taking the time to travel to Glasgow to show their support for people in developing countries. She said: “Stirred by climate activists and young people, concerned citizens and faith communities are coming together to demand real, immediate and lasting action to avert a climate catastrophe. When they meet in Glasgow, world leaders will be hearing the voices of these five individuals and millions more like them. The seas are rising but so are we.”

Speaking after the conclusion of the COP26 conference, Jeni said: “COP26 is now over with an agreement that is flawed but shows there has been some compromise and some important commitments. However, there is still a long way to go to ensure that the words and promises are translated into action.”

Jeni will reflect on her experience in Glasgow and the impact of COP26 in the spring issue of our diocesan magazine ‘Connor Connections’ (out February 2022).