Archbishop preaches at Centenary Commemoration of the Ulster Tower, Thiepval 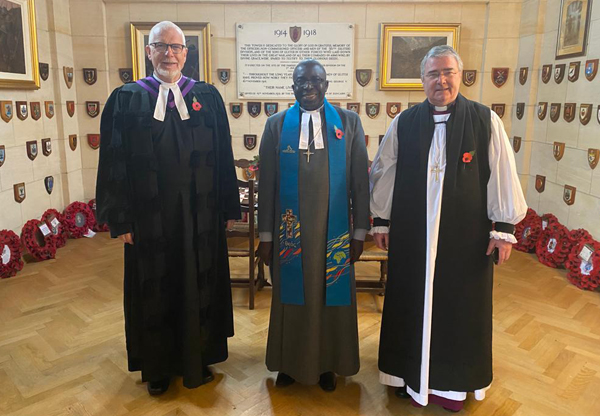 From left: the Rt Rev Dr David Bruce, Moderator of the General Assembly of the Presbyterian Church in Ireland; the Rev Dr Sahr Yambasu, President of the Methodist Church in Ireland; and the Rt Rev John McDowell, Archbishop of Armagh and Primate of All Ireland, at the Ulster Memorial Tower, Thiepval.

On Friday morning, November 19, the Most Rev John McDowell, Archbishop of Armagh and Primate of All Ireland, delivered the address at the Commemoration Service for the 100th Anniversary of the Ulster Memorial Tower, held at Thiepval, on the Somme.

The service was organised by the Somme Association and included a call to worship by the Rev Dr Sahr Yambasu, President of the Methodist Church in Ireland, and a reading from John Chapter 15 by the Rt Rev Dr David Bruce, Moderator of the General Assembly of the Presbyterian Church in Ireland.

If I could first thank the organisers of this service, the Somme Association, for affording me the privilege of giving the address at this historic and poignant occasion.

Up until 1919 public memorials to a war or a great victory usually took the form of an equestrian statue of a famous general. You can see such statues in many cities across Europe still. But the scale of casualties, in what the General Service Medal calls ‘The Great War for Civilisation 1914-1919’, was so vast that there was an instinct that such memorials would simply no longer do.

At first there was a plaster and lath cenotaph (a cenotaph is an empty tomb) was erected in Whitehall, in 1919. It seems the government’s intention was that it would be removed following, what was in effect, the first Armistice Day ceremony. But it soon became clear that the nation expected that the memory of the fallen should not be so soon forgotten in the public sphere, just as it would not be forgotten in the homes of the millions of war dead. So the great imperial architect, Edward Lutyens, was commissioned to design the elegant and simple memorial which still stands in Whitehall.

And memorials began to appear in other places. Near to where I grew up, a housing estate was built specifically for demobbed soldiers. The streets were given names like Bapaume, Albert, and of course Somme Drive. And in the middle of that little estate off the Cregagh Road in Belfast, stands a stone memorial cross.  The cross of Jesus Christ; the place where God went deeper into human suffering than even war and disease could go; and rose on the third day with a kingdom in his hand.

And of course this memorial here in Thiepval, the first to be built on the Western Front, witnessed to the bravery of soldiers from the nine counties of the historic Province of Ulster, who gave their lives in that hellish war, and is specifically associated in the minds of so many with the 36th Ulster Division, and their bravery in the long drawn out ordeal which history knows as the Battle of the Somme.

Of course, mass remembrance means individual remembering, whether in great monuments such as we have at The Menin Gate covered in the names of the fallen, or on those little tablets which hang on the walls of so many churches and public buildings throughout the United Kingdom and Ireland. When millions perish, it is easy to dwell on the scale of the loss (which is truly mind numbing) and to forget that each was an individual life; a human being who God loves with an everlasting love.

Individual lives. There were three brothers who lived in the town of Banbridge. They worked in the linen industry where the pay was poor and the working conditions were worse. So, one day in 1912 they walked from Banbridge to Lisburn and enlisted as regular soldiers in the Royal Irish Rifles. Even the peacetime army was more interesting than life in a quiet rural Irish town.

They learned to take pride in their regiment, with its distinctive speedy march. As country boys they were already excellent marksmen, and had that raw, bony strength found in so many who help out with farm work. The brothers played hockey and football, first for the regiment, then for the Corps, then for the Army.

And at the outbreak of war in the summer of 1914 they sailed with the British Expeditionary Force to France. All their lives they were proud to have been Old Contemptibles.  All three were wounded at the retreat from Mons, but not so seriously that they couldn’t go on to fight here on the Somme and at the Third Battle of Passchendaele in Ypres.

Just before he left hospital in Ireland to rejoin his regiment in 1916 one of the brothers, Jimmy, was given a gift of a Book of Common Prayer by his girlfriend. Written on the inside were the words,“Hoping God may spare you and bring you home again”.  And here is the little New Testament which that young woman gave to my grandfather, a private soldier of the Royal Irish Rifles

The Great War was the end of faith for many. Those who had grown up in an easy peace and a superior culture. Those who were confident in the onward march of civilisation, because they had never had their self-confidence tested; who did not know the wickedness that men were capable of. In the century before the war the Churches had domesticated God and harnessed him to their purposes. He had become their asset and their patron, rather than their Judge and their Redeemer.

And suddenly in the great cataclysm of total war and in the horrors of the battlefield, the high seemed low, and nations halted in their stride; and the brief candle was out; and what was man that he is to be accounted of?

The Great War was so tragic because of the genial optimism of so many of the young men who entered it with high hopes of saving Christian civilisation.  It is a wonder that anyone who witnessed it survived in good mental, never mind physical, health. And each of them, whether they fell in battle or simply survived, deserves to be remembered, because they had to face into a holocaust which the world had never before experienced.

“Hoping God may spare you, and bring you home again”. So, today we hallow the memory of each one of them; not only for the courage of their actions, but for the greatness of their souls.

And now unto Him, the only true God, immortal invisible, be ascribed all might, majesty, dominion and power, as is most justly due. Amen.