Rebekah makes final of BBC ‘Young Chorister of the Year’ 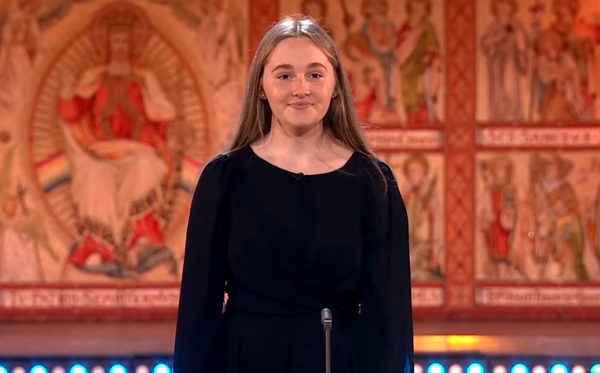 Rebekah Devlin in Salisbury Cathedral for the semi-final of the BBC ‘Young Chorister of the Year’ competition.

Huge congratulations to All Saints’, Belfast, parishioner Rebekah Devlin, whose stunning rendition of ‘He will hold me fast’ has earned her a place in the final of the BBC Songs of Praise and Radio 2 ‘Young Chorister of the Year’ competition.

The song, by Matt Merker and arranged for Rebekah by Jonathan Rea from New Irish Arts, was one of two video recordings 16-year-old Rebekah submitted as her entry to the competition last May.

Viewers who tune in for the competition final on December 5 will hear her sing her second song, ‘Midwinter’ (Bob Chilcott) as she takes on boy and girl finalists from across the UK in her bid for the prestigious title.

Rebekah, a sixth form student at Strathearn School and a singing pupil of Jenny Bourke, secured her place in the girls’ semi-final after competing against hundreds of entrants.

She sings regularly with All Saints’ Church, and is a member of the Belfast Philharmonic Youth Chamber Choir, the National Youth Choir of Northern Ireland and the Belfast School of Performing Arts. She also sings with her school’s Chamber Choir.

Her mum Tricia has been Musical Director at All Saints’ for 30 years, and along with Rebekah’s dad Alistair is a member of the Priory Singers. Older sister Stephanie released a CD a number of years ago, and brother Tim is also musical.

Entries for the ‘Young Chorister of the Year’ had to be submitted several months ago. “I sent my videos in for the competition last May, then completely forgot about it until we got a call in July,” said Rebekah. “I really did not expect it and I am just really excited to have got this far.”

The semi-final was recorded in Salisbury Cathedral, and the adjudicators were Aled Jones, who presents the programme; composer Howard Goodall; vocal coach and presenter David Grant; and renowned soprano Lesley Garrett. All had really positives comments on Rebekah’s semi-final performance, broadcast on November 21.

“I have really been singing all my life. I joined a theatre group and Belfast Philharmonic when I was eight, and started singing in the choir around then,” said Rebekah. “I sing in church, and with our senior school choir before Covid. Our school chamber choir is just started up again. Lockdown has made me really appreciate being able to get back together to sing, although we did have a virtual choir and met online.”

Rebekah is in Lower Sixth, studying Music, RE, Geography and History at AS Level. The semi-final was recorded in beautiful Salisbury Cathedral just after half term. “It was great to meet the judges, especially Aled. I felt so honoured,” said Rebekah. “Laura Wright, a previous winner who was a judge last year, gave us all a mentoring session the day before the semi-final was recorded. She knew how we were all feeling.

“I was quite nervous about the competition. I had Covid not long before, so I didn’t even know if I would be able to go until a few days before because I still had a bit of a cough. It was great to meet the other choristers, although we didn’t meet the judges until after singing.”

Tricia said the opportunity to sing on national television in this competition was a ‘privilege and honour’ for Rebekah. “It is a great opportunity to show her talent and her gifts,” she said. “We were surprised when she reached the final, not because she hasn’t got a beautiful voice, but we never expected her to get this far!”

If you missed Rebekah singing in the semi-final, you can watch again on the BBC iPlayer, and tune in for the final on December 5. Rebecca will also feature in New Irish Arts ‘Ireland in Christmas Praise’ concert in the Waterfront Hall on December 17-18, when she will sing a solo.