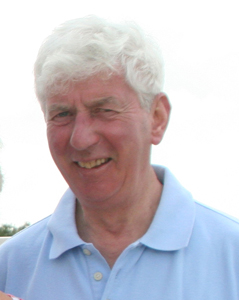 The Ven Jack Patterson kept ‘the simple truth that Christ died for you’ at the heart and centre of his life, the Rev Malcolm Ferry told mourners at Jack’s Funeral Service on November 20.

The former Archdeacon of Dalriada died on November 15, aged 82.

Referring to two readings Jack had specially chosen for the occasion, Malcolm, rector of Agherton Parish where the service was held, said: “They are not some carefully sought out obscure passage from a hidden prophet or some verse filled with theological wordplay. Rather they give us the simple yet profound words commonly used at funeral services to point us to hope and to the Redeemer of the World.

“Jack in his ministry remained determined that he should keep the main thing simple. And what do I mean by the main thing?  – that at the heart and centre of your life is the simple truth that Christ died for you.”

He said that Jack had witnessed over many years, as a faithful pastor to his people, that when religion becomes complicated, it is a sign that it is drifting away from the realities and centralities of faith.

“Jack had discovered that, even as he looked around at the world of nature, the beauty of the north coast and the little patch that was his parish, he could see the simplicity of God’s design everywhere,” Malcolm said. “In the Parish of Ballintoy and Dunseverick, where he gave his life’s work – he saw how God built the year around four seasons. That simple pattern of four wasn’t complicated and if it was good enough for the seasons it was good enough for Jack. To over complicate things was a sign that it is departing from Christ.”

Malcolm continued: “Jack looked for the relationship in ministry and as a pastor for his parish he excelled at that… Jack built and developed relationships with the people of God and through his easy style of ministry brought the simplicity of the Gospel of Christ as he led them forward and pointed them to God.”

Malcolm told mourners that Jack was well read and up for debate.

“As a pastor of his people Jack’s easy style meant that those who found themselves under the pressures of daily living, busy and worried and anxious  – Jack was there to listen and pray that those in need would be reminded that Christ was with them, and Christ is adequate. The beautiful simplicity that is a living relationship with Jesus.”

He said Jack’s family know the sacrifices he made personally and that they had made as a family so that Jack could be the pastor he was.

He added: “Some clergy have a certain type of humour which breaks through the polite false smile. Like when Jack would quip that some have greatness thrust upon them but he was just great!”

Malcolm spoke of Jack’s elevation to be a Chapter Canon in St Anne’s Cathedral in Belfast and then to Archdeacon of Dalriada, positions which he said he held with distinction, although they were far from his first love of being a pastor.

“Thankfully, Jack laughed at himself at the lack of his ‘managerial’ skills but deep down the Church had a man of God where the simplicity of the Gospel was to the front,” Malcolm said.  He added that after retirement, Jack was charged with bringinbg ministry to the retired clergy families and again to keep and build relationships with the people of God.”

Extending his sympathy to Jack’s wife Frances and their family, Malcolm said. “Here again the pastor speaks and Jack does so in the words he chose from the Old Testament.  Ecclesiastes chapter Three we hear – ‘To everything there is a season, and a time to every purpose under the heaven:  A time to be born, and time to die; A time to weep, and time to laugh; a time to mourn, and a time to dance.’

“Surely we hear, in those words, the simple and profound truth of life and death and then we hear echoing in our ears the words of Jesus himself: ‘I am the way, the truth, and the life: No man cometh unto the Father, but by me.’

“The simple yet profound truth that we affirm today for ourselves in our lives. The same yardstick which John Norton Patterson lived in life and ministered in word and sacrament over his long and significant years ordained as priest and pastor. A truth that will bring comfort to each one of you in the loss of Jack.”

Prior to the service, the Bishop of Connor, the Rt Rev George Davison, paid this tribute to Archdeacon Patterson:-

“Jack Patterson’s 40 year ministry in the Diocese of Connor, the greater part of which was spent in the parish of Ballintoy with Rathlin and Dunseverick, was a model of diligent pastoral ministry to a generation of people in Co Antrim.

“His faithful service in north Antrim was recognised with his appointment as Archdeacon of Dalriada during the final years of his active ministry.

“Jack continued to be a familiar figure to many as he lived out his retirement in Dunseverick. He will be greatly missed by many in the diocese and we extend our prayerful sympathy to Frances and his grieving family.”