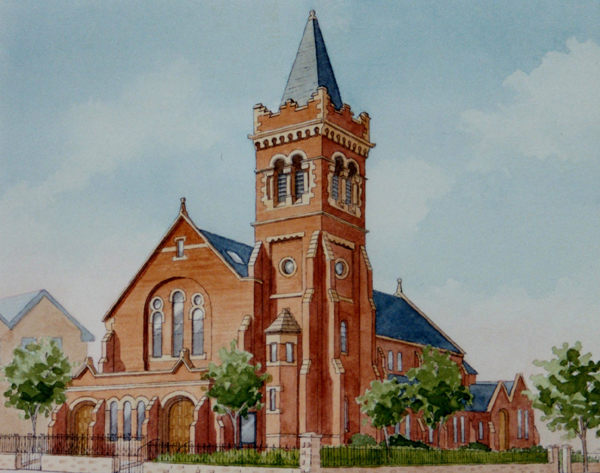 St Simon’s Parish Church in Donegall Road, South Belfast, formally reopened for worship on Sunday November 21 following work to reorder the inside of the church.

Special guest at the service was the Bishop of Connor, the Rt Rev George Davison.

Although the works to the building took six months, the church had been closed for the best part of two years due to the pandemic – it opened briefly for worship last Easter – before the builders moved in in mid-April.

Priest-in-Charge, the Rev Raymond Moore, said work took longer than the estimated 13 weeks because pipes damaged in a fire in the church back in 1973 needed to be replaced.

The parish has an interesting history. A site for St Simon’s Parish Church and school was purchased in 1900 for £829. St Simon’s School opened first, under principal Robert Jefferson, later to become Bishop of Ottowa and Chaplain to HM Governor General of Canada.

The school was used for Sunday School and worship, but an Iron Church, formerly used in St Donard’s Parish, was erected on the site and opened for worship in August 1911.

Despite high unemployment, a decision was made to go ahead with the building of a new church, which was then joined to the Iron Church. This was consecrated in June 1924.

When the 1928 General Synod passed the Belfast Additional Church Act, St Simon’s was the first to benefit with grants totalling £10,481. A nave was built, and the Iron Church was reconstructed on a nearby site to serve as a parish hall. The renovated church could accommodate 500. A little prayer desk and organ originally belonged to the Chapel of the Resurrection at Belfast Castle.

Funds for this latest refurbishment of the church were raised from the sale of the parish hall, which had served uniformed organisations including the Church Lads’ Brigade and Girls’ Friendly Society, Sunday School along with adult organisations such as Mothers’ Union and Ladies Guild, Bowling and Badminton Clubs since the start of World War Two.

The sale took a number of years to complete, and the hall was finally transferred to its new owner in 2019 for use as a local community hub.

“We had discussed what to do with the money,” said Raymond. “We no longer had our own social space, so we took six pews from each side of the aisle at the back of the church, and two from each side at the front to create space.

“The baptistery was in an alcove at the back of the church, and was never used, so we had the font refurbished and moved to the front where the pews had been removed. We now have a liturgical area with the font, lectern, rector’s prayer desk and communion table all together at the front.”

The project included erecting glass panels behind the pews to the rear of the church, and the addition of cupboards and workspaces, along with a small kitchen in the alcove which once housed the font, means the parish has a new social space. The building also has a new disabled toilet, and access to the church has been remodelled.

While the church has been closed to parishioners, Raymond has been live-streaming services from the building each week.  The first service inside the renovated church was held on Remembrance Sunday, followed by the official opening with Bishop George on November 21.

Raymond said St Simon’s hoped to hold a community event in its new space later this year or early in the new year.