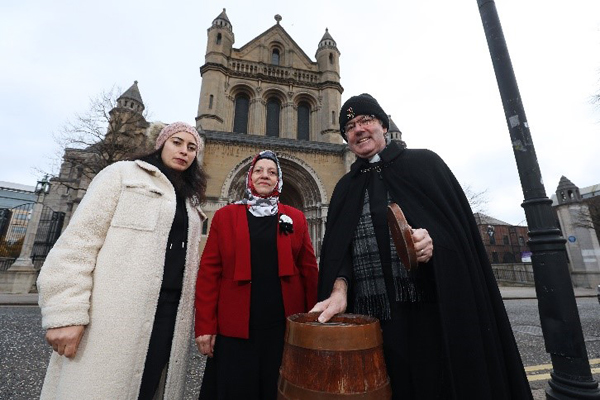 Dean Stephen Forde pictured outside St Anne’s Cathedral with Nemat and Melika, refugees from Syria and Algeria who are supported by Footprints Women’s Centre.

The fire at the Multi-Cultural Association occured on the day of this year’s Good Samaritans Service, when the charities to benefit from the 2020 fundraiser came together in celebration. The PSNI have said the blaze was a deliberate hate crime.

Dean Forde said this year’s Black Santa Appeal, now in its 45th year, should be focused on supporting refugees and helping to create ‘a more inclusive society for all.’

“The intolerance of difference is the root cause of many of our problems in Northern Ireland,” the Dean said. “Yet we know that our communities can be sources of incredible support and love for people. I hope to use the appeal this year to tackle prejudice and misconception, and to change the reality for some of the most vulnerable people in our society.

“Fortunately, few of us will experience what forces some people to flee as refugees. Those who come here because of their fear of persecution for reasons such as race, religion or sexuality do so because they believe they will be safer in this place. But the likelihood of a minority ethnic person experiencing a racist attack in Northern Ireland is 17 times higher than a person from a Catholic or Protestant background experiencing a sectarian attack.

“As a society, and as individuals, we need to do more to stand up to hate crime in Northern Ireland. I hope this focus from the Black Santa Appeal goes some way to supporting the people who need it most.”

The Belfast Black Santa Sit-out campaign was started in 1976 by Dean Sammy Crooks. All the money gathered is donated to local charities with a proportion given to Christian Aid. None of the money raised goes to Belfast Cathedral.

As well as charities which support refugees, the money raised by this year’s Appeal will support over 200 other local charities, including those which care for people with disabilities; children and the elderly; the improvement of employment opportunities for young people and a host of small charities that can’t afford paid fundraisers.

The funds collected in the weeks before Christmas are distributed to charities at the Good Samaritans Service, held in the Cathedral early in the year following each Sit-out. And for the Dean, the enduring impact of the Appeal is what makes it so special:

“It’s an honour to continue this tradition and to help people support over 200 charities in Northern Ireland,” he said. “The continuing impact of the pandemic means fundraising for charities has once again been impacted severely and this campaign is a really important source of help.

“The Black Santa Appeal is something I look forward to every year, and I know that it’s a Christmas tradition for many people here. This year we’re delighted to be supported by some of Northern Ireland’s influencers on social media, and I hope it will mean the beginning of a new tradition for many more people.”

This year’s annual Sit-out runs from Monday December 13 until Christmas Eve. People can visit the Cathedral and donate directly at the famous barrel, either through cash donations or via contactless transaction.

The Appeal website will accept online donations throughout the month of December. It’s also possible to purchase original merchandise to support the Black Santa Appeal, including a beanie hat designed by the local artist James Ashe and made by the social enterprise Orchardville. Interviews with a number of the charities that will benefit from this year’s appeal are also featured on the website.

The professional services firm PwC is once again supporting the Cathedral with volunteers to deliver the online campaign. Last year it helped raise the appeal’s final tally to more than £200,000.

Lynne Rainey, PwC Partner and Purpose Lead in NI, said: “It’s a privilege to support Dean Forde as well as the many charity organisations across Northern Ireland for a second year through the Belfast Black Santa campaign.

“The juxtaposition of the Good Samaritans Service taking place at the same time as the attack on the Multi-Cultural Association highlights the importance of this year’s focus from the Cathedral. No-one wants to become a refugee, but those who are forced to deserve help and support.

“Our society is at its best when it’s inclusive and welcoming, and we all benefit from increased diversity and learning from other cultures. I hope everyone gets behind this year’s appeal.”