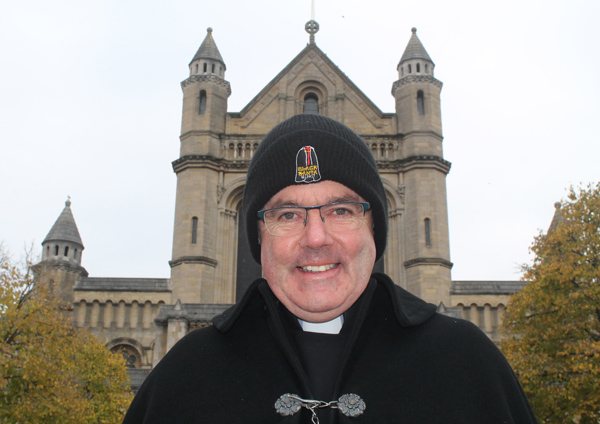 Black Santa, Dean Stephen Forde, will do a special sit-out for Ukraine each Wednesday afternoon during Lent.

Belfast’s Black Santa will take to the steps of St Anne’s Cathedral on March 9 for a special sit-out to raise funds to support those fleeing the war in Ukraine.

Dean Stephen Forde will be back on the cathedral steps just over two months after finishing his annual Christmas sit-out, and this special appeal will run throughout Lent, with the Dean ‘sitting out’ and collecting donations each Wednesday from 12pm-3pm for six weeks. Donations can also be made online on the dedicated Black Santa website: https://www.belfastblacksanta.org/.

This is not the first time Black Santa has responded to humanitarian crises in the world. In 1974, Dean Sammy Crooks collected funds for people who lost everything following major flooding in Bangladesh; and, in the wake of the Boxing Day tsunami of 2004, Dean Houston McKelvey raised almost £1 million to support devastated communities.

The Dean will be donning his familiar Black Santa cloak, and this appeal will work in partnership with Habitat for Humanity and Christian Aid.

Both charities are also supported by the Church of Ireland Bishops’ Appeal. Habitat for Humanity has extensive experience of working in Poland, Slovakia, Hungary and Romania, and will be providing emergency provisions and accommodation to the thousands of refugees crossing daily from Ukraine into these nations. Christian Aid, now a member of the Disasters Emergency Committee, was established by the churches in the aftermath of World War Two, specifically to offer humanitarian aid to refugees across Europe who emerged from the devastation of that conflict. Working with partner churches across Eastern Europe, Christian Aid is channelling funds to the places and people where it is needed most. 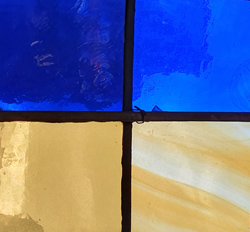 The colours of Ukraine, reflected in a window in the Chapel of Unity at Belfast Cathedral.

Through his weekly stint on the steps, Dean Forde will give the people of Belfast and beyond the opportunity to express their generosity in support of those people suffering bombardment in Ukraine, and those who have been forced to flee as refugees to neighbouring countries.

Dean Forde has already heard first hand from some of those involved in the crisis on the ground. He said: “In the week when Russian troops first invaded Ukraine, and the bombardment of Ukraine’s cities began, I was involved in a virtual conference with church people from across Europe.

“We were welcomed by church leaders in Poland, who then excused themselves to travel to their border with Ukraine and establish emergency reception posts for refugees. Online, I shared conversations and prayers with the Archbishop of Estonia, and church leaders from Finland. Each was deeply conscious how this invasion could impact on their own nations. The opening address, delivered on Zoom, was from the Ukraine itself, from the city of Lviv, whose central train station is now familiar to us all – a church leader speaking across Europe in real time as the invasion advanced across his country. Over two days, on computer screens in homes across Europe, we became intimately connected by a war which will affect us all.”

The Dean continued: “As Christian people, and as human beings, we cannot watch the suffering of our closest neighbours and do nothing. When the fleeing mothers and children could be my own daughters or grandchildren, I cannot stand by.

“Let us remember that our Government has pledged to match every pound we raise with a further pound of government funding, doubling our personal giving. What we will give, we give for people just like ourselves, who have had to leave everything behind, not least their menfolk, and step into the arms of strangers across borders.

“Each of us struggles to know how best to respond to this crisis. The gift of open hearts and our generous giving is a powerful response in the face the destruction and despair of such a violent war.”

“Over these next six Wednesdays, please be as generous as you can.”